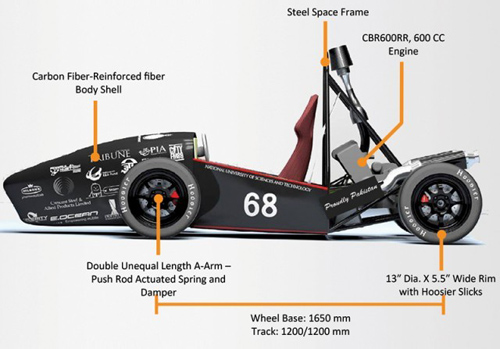 National University of Sciences and Technology (Nust) students unveiled the car they have manufactured to present at the Formula Student competition in the United Kingdom on July 9.  The contest, which is the world’s most popular student motorsport competition, is organised by the Institution of Mechanical Engineers.

It challenges student engineers to design, build and race a single-seat racing car in one year. Dozens of Formula Student alumni have progressed to Formula One, and hundreds more are now working at the world’s largest automotive firms helping to design and engineer the cars of tomorrow.  The 30-member Nust team worked on the car for nearly a year. The design took six months while manufacturing it on campus took another three months. Shah Talha Sohail, a team member who will also be driving the car in the event, said the endeavour by the students is basically the result of their love for motor sports and also the desire to make Pakistan proud.

“We are an all-student team and that is the best part,” Sohail told The Express Tribune, adding that they have four girls on the team as well. He is excited to be competing with the best engineering students from across the world. “We are hoping that our car manages to win the competition. It’s an honour, honestly, even to be participating.”  The Pakistan team was shortlisted for the competition among 114 teams out of 178 entries this year. Sohail explained that the competition will judge their car on its design, technology and statistics and business aspects. “It will be a tough journey to get to the track, as the team will need to fulfil at least 1,000 rules in the book before even going for the endurance test, which will be the race,” he said.

“Our car will go through different stages, such as noise tests and engineering tests.”  Last time, Sohail’s team finished at 84 out of 136 countries. They have participated thrice in the same competition. “We didn’t pass all the tests, so this year we want to go through to the race,” he said. “Basically, the scores in each test will determine our position. Hopefully, we’ll manage to pass all the three test stages in the competition before hitting the tracks.”  There is a lot more pressure and they have more sponsors. “Last time, I feel we weren’t as prepared but now I know I’m more experienced and we have a good car,” said Sohail. The total cost of this project is Rs7 million, he added. “We are targeting to finish among the top 40 teams.” -awaztoday