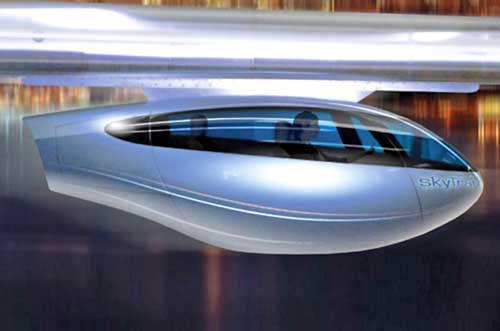 It’s not quite as exciting as flying cars, but the city of Tel Aviv in Israel is currently testing out a new form of transport, whereby people can ride in two-man hover car vehicles travelling at high speeds in mid-air. The system works by suspending streamlined, jet-like vehicles in mid-air from a Magnetic Levitation (Maglev) track, using state-of-the-art technology by California-based company skyTran, and the cars can potentially reach speeds of up to 240km/hr.

The initial test will see sky Tran build a 500m-long track around the campus of Israel Aerospace Industries (IAI) by 2015, and if the trial is successful, the city of Tel Aviv wants to roll out a full commercial hover car transport system running through the city by the end of 2016. Passengers will be able to use their smartphones to order a hover car, which will meet them at a specific station of their choice. The biggest benefit of travelling by hover car is that there is no interruption in the flow of vehicles being able to enter or exit the sky Tran track stream, and users who are faster to board their vehicles can circumvent people who wish to take a longer time, without causing traffic congestion.

The vehicles are also programmed by a computer-controlled system to only go to the destination you ask it to go to and there are no schedules, so people can travel 24 hours a day and just make an order for a vehicle through their smartphone app. For people who want to travel in a group, multiple sky Tran vehicles can be ordered that will zip along the track in a computer-linked caravan, so no members of the party are left behind. The company also envisions people who shop a lot ordering a second vehicle, piling their shopping into it and then having two vehicles travelling together.

Best of all, sky Tran stations can be placed anywhere, even underground or within buildings, the infrastructure is cheap to install and the entire system is powered by renewable energy like solar power. The commercial hover car transport system that Tel Aviv wants to roll out will take two years to be constructed and cost a total of $80 million (£47m). sky Tran says that if the system is successful, it will be expanded to become a 200km urban and suburban network for commuters, although initially it will be more of a novelty for fun seekers or tourists. Tickets for the service are expected to cost about $5 and discounts, subscriptions and charges based on the distances travelled per kilometre will also apply. “Tel Aviv is a world city. It’s a destination for people around the world.

A centre of commerce,” sky Tran CEO Jerry Sanders told Reuters. “Israelis love technology and we don’t foresee a problem of people not wanting to use the system. Israel is a perfect test site.” sky Tran is currently in advanced planning to provide hover car systems with the cities of Toulouse in France, San Francisco and Kerala in India. -ibtimes