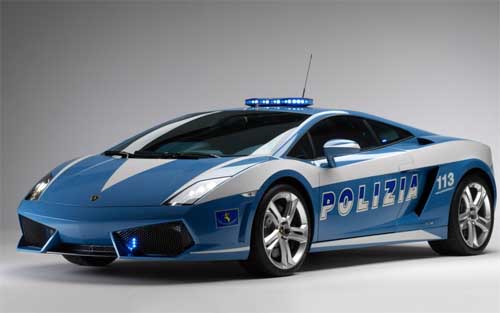 There are multiple examples of this Japanese supercar being used among police fleets in the United Arab Emirates. In Dubai, this is one of the most affordable cars on the fleet. Abu Dhabi added this powerful machine to it’s police fleet in 2009, beating Dubai to the punch. However, these 485 hp beasts are used for promotional events and not in everyday pursuits.

During the 2011 National Day parade in Qatar, police unveiled an entire fleet of these German luxury sedans. Given that Qatar is the country with the highest per capita GDP in the world, it’s no surprise there’s money to burn on not just one but many of these high-end cruisers. While other countries have no problem adding one or two expensive and luxurious autos to their police fleets as a show piece, it’s rare for an entire fleet of the same model to be used. Qatar’s sovereign wealth fund actually owns Volkswagen AG shares, too, so perhaps they’re indirectly offering up some free publicity to help the bottom line.

With a plate number of 2020, this British supercar owned by the UAE police force might be bragging about the United Arab Emirates’ winning the hosting of Expo 2020. This mighty Dubai patrol car boasts a 3.8-liter twin turbo V8 engine that puts out an extremely impressive 616 hp.

In a brilliant bit of marketing and a show of national pride, two Gallardos were donated to the Italian police in commemoration of the force’s 152nd anniversary in 2004. These supercars were used by traffic police in emergency situations. In 2009, one of the police’s Lambos was involved in a collision with a SEAT car, which totaled the Gallardo. But to make up for it, Lamborghini donated a Huracan (Gallardo’s successor) to the Polizia this year.

Here we go with Dubai again. If there’s a supercar that’s creating a buzz at the motor shows then Dubai has to add it to its police fleet. A four seat, four wheel drive FF would be an ideal supercar for hauling baddies to the pen. But alas, this Italian supercar won’t be used in any hot pursuits. Rather, it will patrol tourist spots around the city.

At the MPH ’06 car show in Birmingham, England, London Met Police showed off this modified Lamborghini, which assuredly was just for show and not paid for with taxpayer funds. The 6.5-liter V12 supercar was pulled over by other cops curious of the new wheels.

This 700 hp supercar has a top speed of 350 km/h, but it never reaches its top speed in Dubai. Instead, it’s being paraded around as a marketing device like most of the high-speed patrol cars in Dubai’s fleet.

You won’t see this on the autobahn. Instead, this Police supercar, which has a V12 offering up 730 twin-turbocharged horses, was created for Germany’s Tune it Safe! program, which aimed to educate German tuners about safe tuning practices.

When Dubai Police started buying up one supercar after another, many joked a Veyron would be next. There were even hoaxes and fake reports circulating. But sure enough, one of these extraordinary, $1.6 million supercars was officially unveiled as part of Dubai’s police fleet this year.

If it’s rare and expensive then Dubai Police have to have it in their fleet. It took a bit of work to put the Dubai Police logos in place on this, as the One-77 (yes there really are only 77 of them in the world) came off the production line in silver. That meant it had to be customised in white before the green piping could be added, to match the color scheme of the rest of the fleet. -therichest