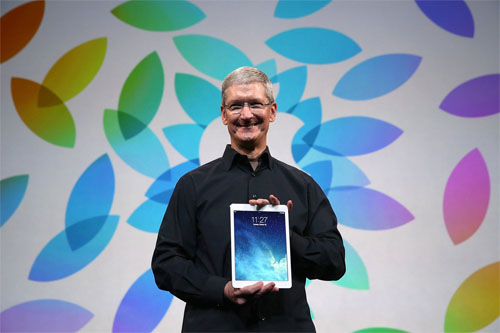 With the global tablet computer market showing signs of cooling, Apple’s expected unveiling of its new iPads Thursday looks to shore up its position at the high end.

The iPad event in a small auditorium on Apple’s campus in the Silicon Valley city of Cupertino comes with Google reportedly set to introduce a new Nexus tablet powered by Android software and manufactured by Taiwan’s HTC.

Google-backed Android software has the biggest share of the global tablet market due to the ubiquity of low-priced devices they power, according to Gartner principal analyst Mikako Kitagawa. Apple tablets driven by the company’s iOS software have the second largest market share, with a small portion going to devices running on Microsoft’s mobile Windows operating system. “Apple has a limited addressable market, because Apple products, in general, are not for everybody,” Kitagawa said of the company sticking with its formula of premium products at top-end prices. “I think Apple is going to keep on with the premium segment; I don’t believe they are going to have a cheap iPad.” The overall tablet market is moving toward low-cost devices, meaning that hardware makers unwilling to let go of premium pricing will tend to lose share, according to International Data Corporation (IDC) analyst Jitesh Ubrani.

Apple’s current line of iPads starts at around $400 for the “mini” tablet and $500 for the larger iPad Air in the US market, nearly twice the cost of many Android devices. Analysts predicted the Apple event on Thursday to be low-key, showcasing iPads enhanced with features such as fingerprint reading and the Apple Pay mobile wallet which are also built into top-of-the-line iPhones. Freshening the iPad line is not expected to dramatically boost sales in a tablet market that has been cooling. “A substantial redesign of the iPad is required to help give much needed momentum to iPad sales and the tablet market as a whole,” Ubrani said. Many tablet makers mistakenly assumed that people would replace the devices as often as they bought new smartphones, according to Gartner analyst Van Baker.

It turns out people are holding onto tablets much longer, because they typically supplement other screens and telecom companies don’t subsidize prices the way they do with smartphon. “As long as my iPad 3 does what I want it to do, there is little incentive to get a new one,” said Baker. While the tablet boom appears to have quieted in developed economies where there is more cash to spend on premium products, opportunity is seen in the business world where the devices can make some jobs more efficient. “One way for Apple to secure their market is by getting more business users,” Kitagawa said.

“It is not the most productive device for many types of work, but some jobs that involve moving around are perfect like health care or sales or insurance inspectors.”

In contrast, jobs that require sitting in an office tending to data, documents or spread sheets are better suited for now to computers with keyboards, large monitors, and mouse controllers. System administrators at major businesses long reliant on Microsoft software understandably lean toward Windows tablets, but are often pressured to accommodate personal mobile devices such as iPads that workers want to use on the job. Microsoft Surface tablets have been geared for business needs and aimed squarely at workplaces. -economictimes