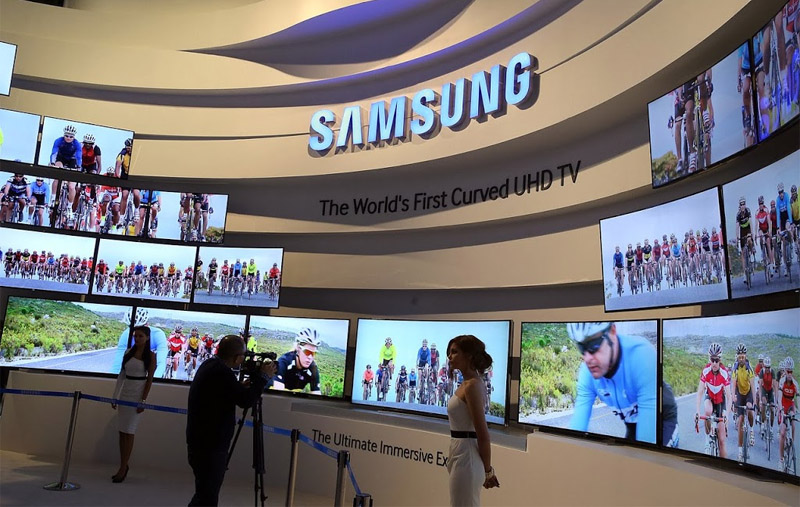 The world’s biggest smartphone maker likely ended 2014 with its global handset market share reduced by Chinese upstarts such as Xiaomi Inc. With its mobile division bringing in around two-thirds of profit, the decline has pressed Samsung to reduce its reliance by redoubling efforts elsewhere. Samsung’s new ultra-high definition quantum dot TVs, dubbed SUHD, are part of that effort. A pickup in the TV business, along with healthy returns from its memory chip operations, could help end a run of steep declines in quarterly profit such as the likely 40 percent fall in October-December. “At this point, the market will be happy with quarterly operating profit around 5 trillion won ($4.51 billion),” said HDC Asset Management fund manager Park Jung-hoon, echoing the mean forecast of 44 analysts polled by Thomson Reuters I/B/E/S.

That would compare with 4.1 trillion won in July-September, and leave full-year profit down 33 percent at 24.8 trillion won – the lowest since 2011. Samsung is widely expected to issue fourth-quarter earnings guidance on Thursday. For 2015, analysts expect TVs together with displays and chips to offset some of the slide in handsets. A Thomson Reuters I/B/E/S survey of 52 analysts puts profit this year at 23.8 trillion won, which would be the second consecutive annual decline. “Based on current conditions, profit from smartphones will likely drop this year,” said HMC Investment analyst Greg Roh.

Yet it may be premature to predict Samsung’s demise. Demand for memory, for instance, is likely to remain strong through 2015 due in part to careful capacity management across the industry, analysts say. The Korean company is also pushing to extend its lead in the TV market by targeting the premium segment with new technology. Researcher DisplaySearch forecasts shipments of UHD sets to more than double this year, compared with growth of 7.2 percent in the broader market for liquid crystal display (LCD) TVs. “Our strength is in the premium segments,” Samsung President Kim Hyun-suk told Reuters in an interview. “Growth in segments like UHD TVs, curved and large-screen TVs will be very strong.” Samsung’s SUHD sets use quantum dots and high dynamic range technology – which improves the rendition of dark to bright tones – offering superior picture quality over regular LCD sets at lower cost than organic light-emitting diode TVs.

But UHD is still in its infancy. Samsung is partnering with Japanese peers, Hollywood studios and content distributors to spur adoption of the format among content producers and consumers. In the meantime, new TVs are unlikely to plug the gap left by falling smartphone income. An ongoing revamp of mid-to-low tier smartphones could help Samsung claw back market share in volume terms. But such growth could come at the expense of profit margins, lending urgency to the need of a new growth engine. “Samsung will likely explain to shareholders what direction the company is heading towards in a year or two and ask for patience,” HDC’s Park said. –Reuters