Sepios the Robot Cuttlefish Takes to The Sea 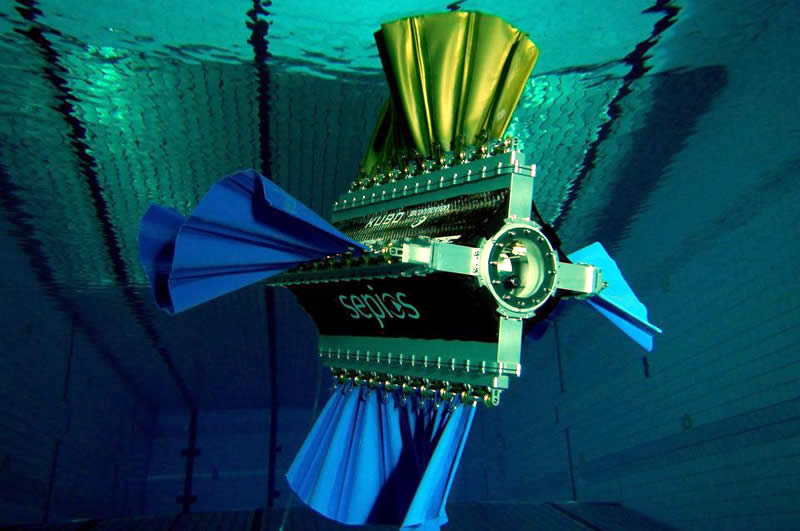 Sepios is no ordinary cuttlefish…..it’s an underwater robot made by undergraduate students at ETH Zurich university of Switzerland. Möller says a key feature is its ability to swim in any direction. “We actually set the goal to ourselves to build it omnidirectionally, so we proved to be able to move forward and backward, drift to any side, and also turn around any axis by performing corresponding movements.” The team of nine students split into groups to piece together Sepios’s 4,600 parts, like its mechanical swim bladder which adjusts buoyancy.

Inside is a live-streaming video camera and various sensors. Laser distance-measuring hardware helps avoid collisions, while an accelerometer, gyroscope and magnetometer allow altitude control. Co-designer Alessandro Schäppi says “we have the base unit in the middle, we have the four outer fin cases with all our servos inside, we have the buoyancy shell made out of carbon fibre, we have our rays, and we do have the latex foil to give propulsion into the water.” Sepios is controlled by the signal of a 3D Connexion space mouse combined with data from an onboard Inertial Measurement Unit.

Sepios’s flexible latex fins are immune to seagrass and coral – making it well-suited to observing sea life. It only reaches four metres per second, but its agility in tests off the French coast made up for its lack of speed. And with its impeccable environmental credentials, this agile aquatic android could become a regular visitor to the ocean floor. – Reuters