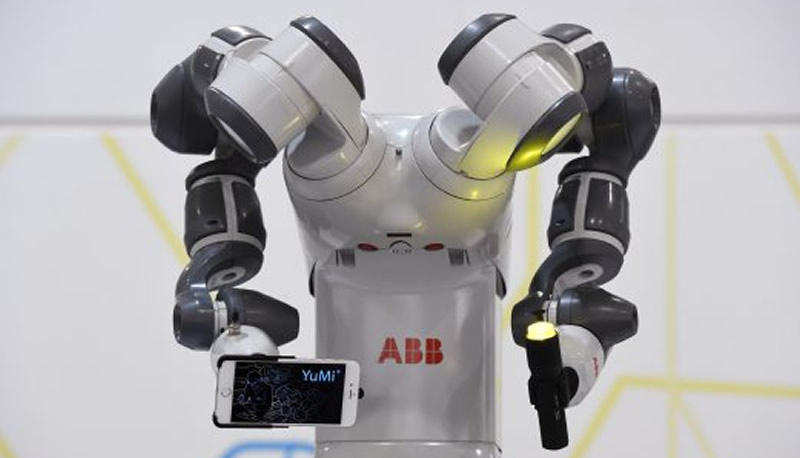 Collaborative robots and intelligent machinery may have wowed the crowds at this year s Hannover Messe, but experts see German industry as having some way to go towards incorporating them on factory floors in what could become the fourth industrial revolution.

The undoubted star of the world s largest industrial trade fair which closed its doors in the northern German city on Friday was YuMi, a collaborative dual-armed robot made by Swiss-based automation technology group ABB. ABB says it developed YuMi primarily for the consumer electronics industry and it is capable of handling the delicate and precise parts of a wristwatch to components used in mobile phones, tablets and desktop PCs. But it will increasingly be rolled out to cover other market sectors as well, the company said. And it is completely safe, so that YuMi and human co-workers can work side-by-side on shared tasks without protective fencing or cages. Chancellor Angela Merkel put its safety features to the test when she visited the stand and placed her finger inside the gripper on YuMi s right arm, causing it to stop. At another stand, the German firm Beckhoff showed off its automated assembly line able to adapt itself seamlessly to handle different parts according to their shape, size and colour, while the human co-worker is equipped with a special smartwatch to monitor the process and intervene if necessary. Industry views the merging of production and online technology as the way forward for manufacturing, where “smart” factories use information and communications technologies to digitise their processes, boosting quality and efficiency at the same time as cutting costs. Digitisation is being heralded as the fourth industrial revolution — hence the term widely used in Germany of “Industrie 4.0” — following the invention of the steam engine, mass production and automatisation.

With nothing less than Germany s mighty industrial prowess at stake, politicians and business leaders are keen to wave the “Industrie 4.0” flag. The government has even launched a new working group of businesses, unions and researchers to look into ways of moving digitisation forward and which will present its ideas and findings later this year. But German companies still have a long way to go, experts say. A recent survey by the BITKOM federation for information technology, telecommunications and new media, found that currently four out of 10 companies in key industrial sectors use Industrie 4.0 applications. The automobile sector is leading the pack, with 53 percent of companies using such applications, followed by electro-technology, the chemicals sector and mechanical engineering.

“Digitisation of German factories is in full swing, but still has a long way to go,” said BITKOM board member Winfried Holz. “In view of the fierce international competition, say from China and the United States, companies must invest massively in the digitisation of their processes and products if Germany wants to hold on to its leading position in the manufacturing sector,” Holz said. But German companies still have some catching up to do. According to the BITKOM survey, around one in four companies currently have no Industrie 4.0 strategy, even if they insist it s on their radar in the future. But as many as 14 percent of companies say digitisation is not an issue for them at all.

Overall, 80 percent of companies said they felt that industry was too reticent in the process of digitisation, with 72 percent saying they were put off by the investment costs and 56 percent by the complexity of the issue, the survey showed. Another 56 percent said they saw a lack of specialist personnel as a problem. If digitisation “is to lead the way for the next 10-15 years, we only partially know exactly how to implement it,” said Wolfgang Dorst, who heads BITKOM s own Industrie 4.0 department. While many large companies have sufficient financial and human resources to digitise their production, frequently is the small and medium-sized companies which are not so well off financially that hvave the creative ideas, Dorst noted.

Bernhard Juchheim, the head of Jumo, a family-run company specialising in industrial sensor and automation technology, told AFP that his company would start building its own smart factory in Fulda in central Germany next year. Critics fear digitisation could render humans obsolete in the manufacturing process. But the process will actually create new jobs, said Michael Ruessmann of the Boston Consulting Group. He authored a study which found that 390,000 new jobs and an additional 30 billion euros ($32 billion) in gross domesticproduct could be created in Germany over the next 10 years as companies switched to so-called “intelligent factories.”