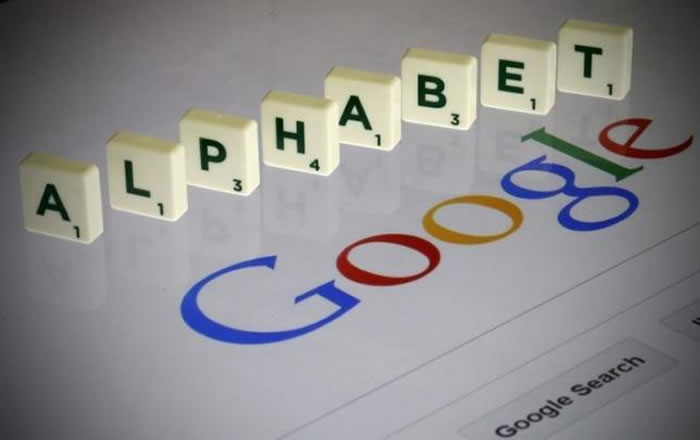 Alphabet, the new parent firm for Google, pushed into record territory Monday as a strong quarterly report put it on track to be the world’s most valuable company. Alphabet reported quarterly profit rose five percent to $4.92 billion on the back of strong online advertising revenue, particularly from searches done by holiday season shoppers using smartphones or tablets.

People made purchases online when time allowed, with Google powering searches and serving up related ads. Google ad revenue climbed globally, gaining on both mobile devices and desktop computers, according to Alphabet chief financial officer Ruth Porat. The California-based Internet colossus said its revenue topped $21.3 billion in the final three months of last year. Prime revenue drivers were mobile search ads and ads on YouTube, where people watch “hundreds of millions” of hours of video daily. Alphabet shares jumped more than five percent to $790.50 on earnings figures that beat expectations. If those gains hold in official trading, Alphabet would overtake Apple as the world’s biggest company by market value. At the official close of trade, Apple was worth $534.7 billion based on its share value, compared to $530.1 billion for Alphabet. “Our very strong revenue growth in Q4 reflects the vibrancy of our business, driven by mobile search as well as YouTube and programmatic advertising, all areas in which we’ve been investing for many years,” Porat said. “We’re excited about the opportunities we have across Google and Other Bets to use technology to improve the lives of billions of people.” The earnings report was the first in which recently formed parent corporation Alphabet separated money made by Google from “other bets” such as its work on self-driving cars or delivering Internet using high-altitude balloons.

Alphabet’s earnings listed a loss of about $3.6 billion last year in a consolidated “other bets” category that brought in $448 million in revenue. Alphabet reported that its overall revenue for last year rose to $74.5 billion from $65.7 billion in 2014. Alphabet subsidiaries include Google, Nest Labs, and Google X labs devoted to big-vision new technologies such as self-driving cars. The move unveiled last year gives the tech giant more ability to focus on its core business, while offering startup-like flexibility to long-shot, trailblazing projects. “Essentially, what they have now is a big advertising business and a venture capital business,” Forrester analyst Frank Gillett said of the new earnings presentation. While Google is best known as the dominant player in Internet search, it has launched a variety of projects in recent years that are marginally related at best to its core operation. Beyond the self-driving cars and Internet balloons, the projects include smart “Google Glass” spectacles, drones, health care and Google TV — none of which has become a major source of income. The new structure under Alphabet is expected to offer more transparency for investors worried about Google investing in money-losing projects. Porat referred to expenses related to “milestones” hit by some Alphabet “big bets” but declined to provide details or specifics on the earnings call.

– Investing in the cloud –

Alphabet expected to ramp investments into Google projects such as virtual reality as well as big bets including the Fiber ultra-high speed internet service it has launched in some US cities. Pichai said that Google is seeing “incredible progress” with enhancing services with artificial intelligence. He also noted that the Internet giant’s priorities this year include beefing up cloud services for businesses, a market dominated by Amazon Web Services and Microsoft Azure. “We are already getting significant traction,” Pichai said. “It is a strongly growing business for us and we plan to make it a major investment area in 2016.” Google has refined the online search ad business to become hugely profitable, but analysts say the company needs to diversify as technology moves away from the personal computer to mobile apps, wearables and other “Internet of Things” connected devices. Industry tracker eMarketer expected Google remain the dominant player in worldwide search advertising, raking in $45.58 billion in revenue this year to claim a share just shy of 57 percent of the overall spend. “As Google continues to diversify its ad offerings, we expect YouTube to play an increasingly important role to Alphabet’s earnings,” said eMarketer analyst Martin Utreras. “Additionally, mobile search should continue to increase as more content within apps gets indexed by Google.” –AFP

‘Blasphemy law can be reviewed, not amended’