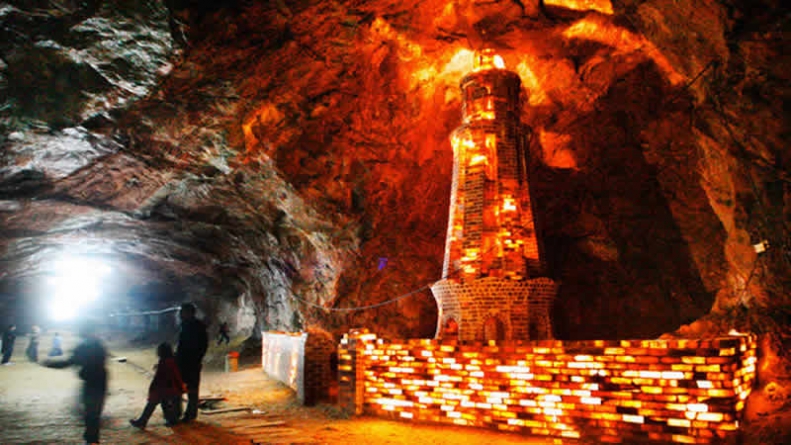 Alright so with all the “places to see” posts we’ve established that Pakistan is a beautiful country and indeed a paradise because of its natural beauty.

And Pakistan definitely isn’t how the news channels or newspapers around the world portray it to be. There’s a lot more to it apart from just terrorism and politics. It seems, however, that there’s a bias towards showing mostly the northern areas when talking about Pakistan’s beauty. It’s true that the north is absolutely gorgeous but that’s not where Pakistan’s beauty ends. Where the natural beauty ends in the north, the historical sites along with the hidden, or should I say less accessed beauties, can be found in Punjab, Balochistan, and Sindh. So let’s broaden our horizons and explore some phenomenal places apart from the north. Before traveling the world, let’s discover our own country first. Pakistan is blessed with loads of magical golden granular materials that make up the desert! Located in Sindh, Tharparkar is one of the five major deserts of the country and is the only fertile desert in the world. It also stretches till the areas of Rajasthan and Gujarat in India. Yes, most of us read about this place in our Pakistan History books and really wanted to go visit but never really got to. Located in Sindh, Mohenjo-Daro is an archaeological site. The Indus River Valley civilization, built the city of Mohenjo-Daro in what is now Pakistan about 4,500 years ago. Built around 2500 BCE, it was one of the largest settlements of the ancient Indus Valley Civilization, and one of the world’s earliest major urban settlements. Looks like some magical place out of the Hobbit movie, this place is actually in Pakistan. Located near Rawalpindi, Taxila is another important archaeological site. Some of the earliest ruins in this area date back to the time of the Achaemenid or Persian Empire in 6th century BC. No buddy, this isn’t the Grand Canyon and yes we too have have something like a National Park! Approximately 190 km from Karachi, Hingol National park is located in Balochistan on the Makran coast with its mountains, Hingol River, desert and deep blue Arabian Sea. The park includes the estuary of the Hingol River which supports a significant diversity of bird and fish species. But apart from that it’s just really cool… reminds you of the Flinstones. Damn, look at that water! Located in Katas Village near Choa Saidanshah in the Chakwal district of Punjab in Pakistan, Katas Raj is a Hindu temple complex . Dedicated to Shiva, the temple has, according to Hindu legend, existed since the days of Mahabharata and the Pandava. Seriously who knew? Located in Bahawalpur, the Derawar Fort is a large square fortress. The forty bastions of Derawar are visible for many miles in Cholistan Desert. The walls have a circumference of 1,500 meters and stand up to thirty meters high. That’s high for sure! Also the fort was built by Hindu Rajput, Bhati of Jaisalmer. Pakistan sure has its share of deserts. The Cholistan Desert is about thirty kilometers from Bahawalpur, Punjab and covers an area of 26,300 square kilometers. Might not be everyone’s cup of tea but if you’re a nature person then you’d probably love it in all its forms. Interesting thing: the people of Cholistan lead a semi-nomadic life, moving from one place to another in search of water and food for their animals. Okay, this is another one of those places we’ve read and heard about many times, but have we been there? The Khewra Salt Mine is located in Khewra, north of Pind Dadan Khan. It’s Pakistan’s largest and oldest salt mine and the world’s second largest. You get all sorts of cool salt things like sculptures, keychains, and just plain big rocks of salt from there! P.S. yes, the walls inside and almost everything does taste like salt, don’t try and lick it please, people have touched it with their hands that you don’t know have touched whatever else. Always wanted to see one of those really cool lakes with the floating leaves inside? Well guess what we have it! Keenjhar Lake is situated in Thatta District, Sindh. It’s the second largest fresh water lake in Pakistan. It provides a favorable habitat for winter migratory birds like ducks, geese, flamingos, cormorants, waders, herons, egrets, ibises, terns, coots and gulls (basically a whole lotta birds). So, you can definitely go there and enjoy a picnic, have a swim, go fishing, or boating. If you’re the historical archaeology type of person this one is a treat. Chaukhandi is an early Islamic cemetery situated 29 km east of Karachi.

The tombs are remarkable for their elaborate sandstone carvings and the style of architecture is typical to the region of Sindh. Generally, the tombs are attributed to the Jokhio and known as the family graveyard of the Jokhio tribe.