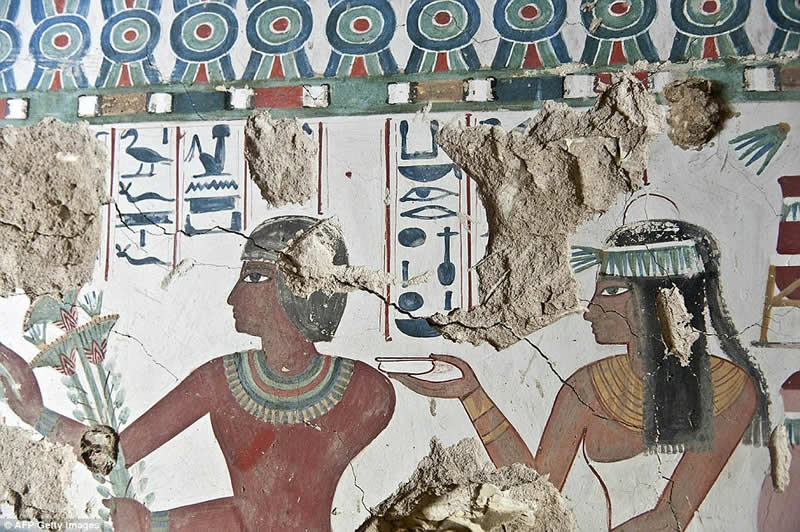 An ancient tomb belonging to Amenhotep, guard of the temple of Egyptian deity Amun, has been discovered in the southern city of Luxor by an American research team, the Egypt’s antiquities ministry said on Tuesday. The ministry says the tomb, found near the southern city of Luxor, dates back to the New Kingdom of the 18th Dynasty (1543-1292 BC) — the most famous of ancient Egypt dynasties. The tombs were found earlier this month near the Sheikh Abd el-Qurna dig site, situated at the feet of the Theban mountains, between the famed valleys of the Kings and Queens over the town of al-Qurna. Incredible photographs distributed by the ministry show a tomb with bright green and brown paintings with hieroglyphics with murals that depict both celebrations and everyday activity, and despite their age are still remarkably vibrant and colorful. Antiquities Minister Mamdouh al-Damaty said in a statement that the tombs do sadly appear to have been looted at some point and the sarcophogi containing the bejeweled mummies were missing. ‘The tomb contains many stunning scenes with bright colours painted on plaster,’ Antiquities Minister Mamdouh Eldamaty said in a statement. ‘Many of scenes represent the tomb owner and his wife in front of an offering table and a view of a goddess nursing a royal child as well as scenes of the daily life,’ he added. The tomb was discovered by a team of American archaeologists alongside an Egyptian inspectors’ team in the city of Luxor, 700 kilometres (435 miles) south of Cairo. However, the temple guard’s final resting place had been vandalised for unknown reasons. The T-shaped tomb ‘was deliberately damaged in ancient times,’ said Sultan Eid, the ministry’s general director for the Upper Egypt region. ‘The name and titles of the tomb owner, some hieroglyphic texts and scenes in addition to the names of the god Amun were deliberately erased,’ Eid added. Luxor, a city of some 500,000 people on the banks of the Nile in southern Egypt, is an open-air museum of intricate temples and pharaonic tombs. Eldamaty said in a separate statement that a royal rest house belonging to King Thutmosis II, also from the 18th Dynasty of the New Kingdom period, had been discovered in the Suez Canal province of Ismailia. – dailymail

Health Secrets about the Pakistani Diet