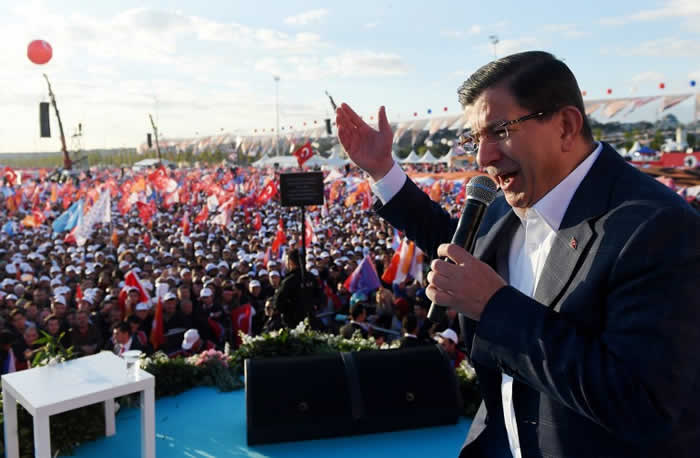 Lonely hearts in Turkey do not despair: Prime Minister Ahmet Davutoglu’s latest ploy to woo voters before the November 1 election is to help singletons get hitched.

Ahmet Davutoglu, a married father of four, told a campaign rally on Thursday that his Justice and Development (AKP) party could help those who were struggling to find a mate — a proposal which sparked much mirth on Twitter.

“You have a job, a salary, food, what’s left? A partner,” Davutoglu told supporters of the conservative party in Sanliurfa in southern Turkey. “When you want to get married, you go to see your parents first. God willing, they will find the ideal person. If that’s not the case, speak to us,” he said. The suggestion sparked derision largely from the secular country’s young, with a flurry of ironic promises to vote for a man seen by some as making a last-ditch attempt to claw back support lost at the June election. “Quit being a politician and start a dating agency,” said Twitter user Ilkay Pazarli, while others put in requests for the type of spouse they were looking for, including actor and model lookalikes.

The prime minister sweetened the deal with a financial incentive: “girl or boy, once a bank account for the wedding is open, the government will add 20 percent of the sum the parents have deposited to help out”. “How could you not love such a government?” he asked as AKP supporters cheered. Davutoglu and his ally President Recep Taiip Erdogan regularly urge the country’s women to have “at least three children”, with Erdogan sparking anger last year by saying that Islam had a role for females: maternity. –AFP