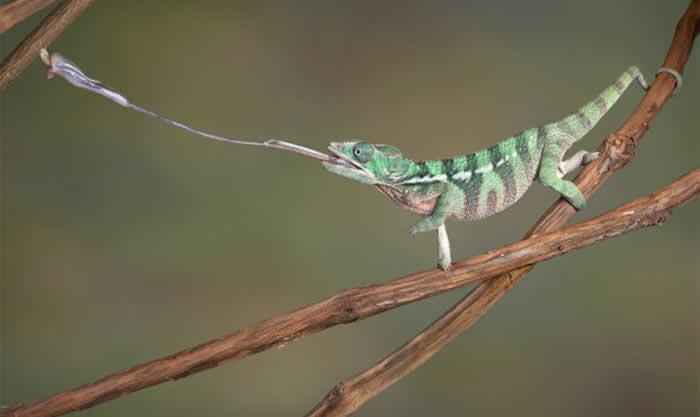 The tiniest chameleons on Earth lash out their tongues with amazing speed, going from zero to 60 miles (97 kilometers) per hour in one hundredth of a second, researchers said Monday.

All in the name of snagging a cricket to eat, the thumb-sized Rhampholeon spinosus “produced a peak acceleration 264 times greater than the acceleration due to gravity,” said the journal Scientific Reports.

The total power output of the chameleon’s tongue was 14,040 watts per kilogram. That is the most powerful acceleration “produced per kilogram of muscle mass by any reptile, bird, or mammal and is the second most powerful among any kind of vertebrate,” it said. “Only a salamander outdoes it.” Brown University biologist Christopher Anderson said he conducted the study because the tongue power of the smallest chameleon species had never been measured.

“Smaller species have higher performance than larger species,” said Anderson, a postdoctoral research associate in the Department of Ecology and Evolutionary Biology. The chameleon’s tongue extends more than 2.5 times its body length, and moves so fast that it needs only about 20 milliseconds to grab a bug for its lunch. –AFP