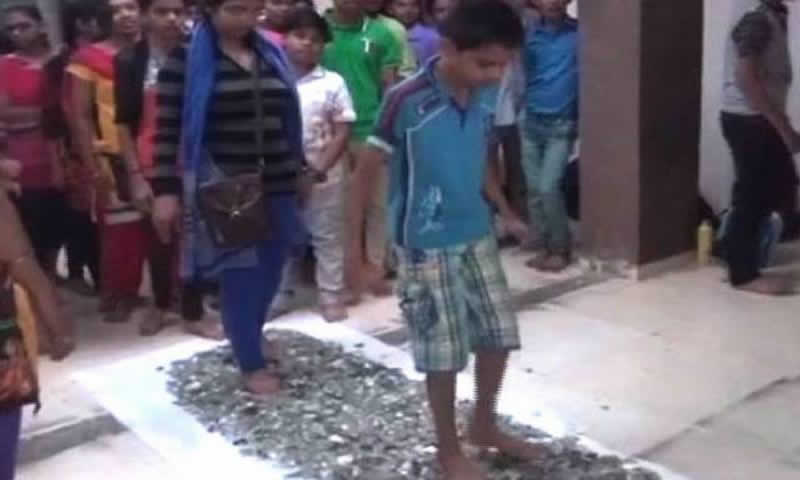 About 70 Indian students walked barefoot over broken glass in an apparent bid to overcome exam phobia and stage fright, sparking a probe into the unusual character-building exercise.

Children as young as 12 took part in the ceremony on Wednesday intended to boost their mental health at a private coaching centre in the western state of Gujarat.

Video footage, picked up by TV channels, shows students slowly stepping along about a metre-long line of thick, broken glass. There were no injuries reported from the incident. “We have ordered a probe into the incident where a private tutor is instructing students to walk on broken glass,” state education minister Bhupendrasinh Chudasama told reporters on Wednesday. Rakesh Patel, who runs the coaching centre in the city of Vadodara, defended the exercise, saying “there is a science behind it”. “This will remove fear and disbelief from the students  minds,” he told reporters. “This workshop was held to get rid of the problems of kids related to stage fear, exam phobia among others,” he said. Parents were also asked to take part in the ceremony.

Hitesh Panchal, who did the walk along with his 12-year-old son, said he was initially horrified at the idea. “But once you undergo the demonstration, your confidence level increases,” Panchal told reporters. “After my son, two girls also got the courage to walk on the glass pieces.” In 2010, a private school in Gujarat also came under fire for making students walk over burning coals and broken glass to boost their confidence. Fire-walking has existed as a religious ritual in many cultures for thousands of years. It has gained some popularity in Western countries as a team-building exercise and alternative health remedy.