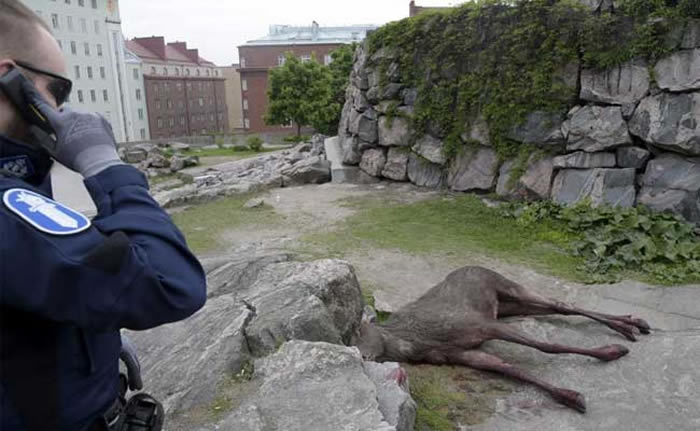 Moose on the loose makes a dash for cash

A bank in central Helsinki was the target of an unusual break-in early Thursday when a confused and agitated moose jumped through a bank window, Finnish police said. “A moose strayed into Helsinki’s centre and jumped through a window into a bank.

Helsinki police inspector Arto Laitinen said, adding that the animal was severely injured in the incident. The one-year-old moose, weighing around 200 kilos (440 pounds), had to be put down by police. “Cases like this are relatively rare… Sometimes moose can be guided away from the populated areas, and often they themselves understand to avoid the centres, which are dangerous for them,” Laitinen said.

The moose is believed to have entered the city via Seurasaari island, a wilderness park near the city centre. Moose, or elk as they’re called in Britain, occasionally enter populated areas in the Nordic countries. In 2014, a moose was badly injured and had to be put down after it jumped through a classroom window in a suburb of the southwestern Swedish city of Gothenburg. –AFP