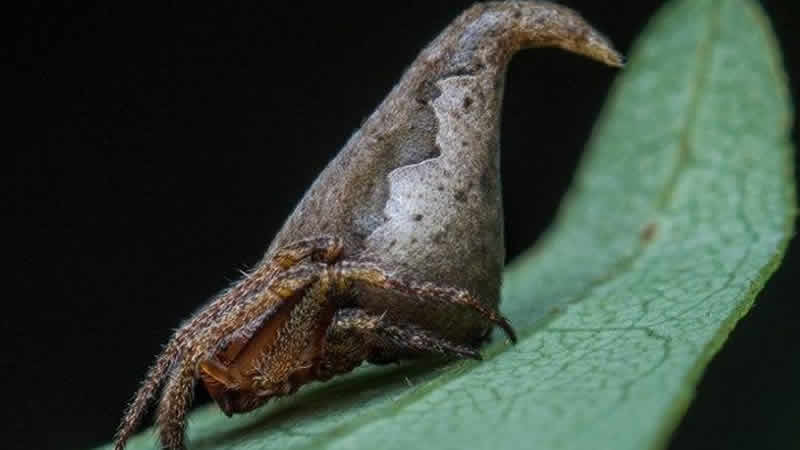 Indian scientists have discovered a new species of spider that looks “uncannily” like the sorting hat in Harry Potter and have named it after its owner Godric Gryffindor, they said Thursday.

The ardent fans of the boy wizard came across the seven millimetre (around a quarter of an inch) spider in October last year during a survey of the lush Western Ghats mountain range in south-west India.

“My colleagues and I are geeks and we all thought, ‘Hey this curious little spider looks exactly like the sorting hat.’ It was uncannily similar,” scientist Javed Ahmed told AFP. So we made a pact that if this turns out to be a new species we will name it after the sorting hat,” he added, referring to the magical headwear that assigns students to their houses at Hogwarts School of Witchcraft and Wizardry in the hugely popular series. By June, Mumbai-based Ahmed and his fellow scientists were “100 percent” sure it was a new species so they went ahead and named the pointy-shaped and nocturnal spider Eriovixia Gryffindori.

A review by experts confirmed that the spider, which mimics the shape of leaves to avoid predators, was indeed a newly discovered species. The discovery was published in December’s Indian Journal of Arachnology and sparked a wave of excitement on social media, with Harry Potter creator J.K. Rowling taking to Twitter to express her delight. I’m truly honoured! Congratulations on discovering another #FantasticBeast!,” Rowling tweeted to Ahmed. How many geeks have the opportunity to describe a species, much less name it, after a pop culture icon and then have the creator of that icon tweet you saying she was congratulated and honoured? I was so thrilled!” said Javed.

Read More: The Karachi Kings – Gearing Up For PSL Season 2

The discovery comes after the recent release of the movie “Fantastic Beasts and Where to Find Them”, a Harry Potter spin-off based on a book Rowling wrote in 2001. It topped North American box offices on its opening weekend, making $75 million. Gryffindor’s spider is not the first species to be named after a popular icon, fictional or real. In 2009 a yellow spider discovered in Malaysia was named after late rock star David Bowie. Three years later Australian scientists named a fly with a golden-coloured rear “Beyonce”, while this year scientists named a tarantula they found in Folsom, California after Johnny Cash, the American music legend who sang the “Folsom Prison Blues”. -dunya