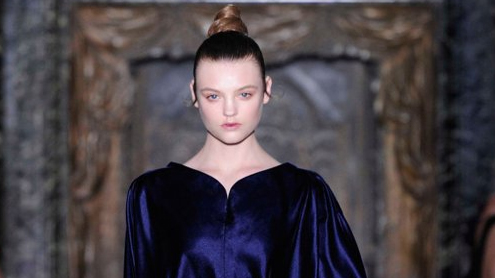 FWD204 Model walks the runway at the Valentino

Once Valentino was legendary for its signature sinful red. From this day hence, after a particularly raceful and poised haute couture collection from the house, it shall be known for a mystical blue.

Inspired by the paintings of the Madonna by Giotto, Valentino’s fall 2012 couture collection, shown Wednesday evening, July 4, in Paris had a saintly air, so prim was the fashion so demure the mood. The floor-length evening dresses, the fluid extended capes, the pulled back hair made the models look almost devout, in this collection by design duo Pier Paolo Piccioli and Maria Grazia Chiuri.

“We wanted to give women a more sacred image, a message of universal respect,” explained Piccioli in the crowded backstage of the Hotel de Rothschild, the Paris mansion where the show was staged. Continuing the spiritual chic, a cape and robe came in a print featuring the Tree of Life; rich in leaves, flowers and pomegranates. Even by the exacting requirements for couture of impeccable handwork and sumptuous finish couture, this was demanding collection. One coat with micro pearl embroidering took three months work to sew.

In one memorable passage, a similar floral print was used in four looks: embroidered on a black tunic; as raised felt on a cocktail dress; in a long gown with cape and finally in a plisse gown, in a brilliant display of controlled workmanship and design.  However, as much of the collection was made in chiffon plisse, hyper embroidered mousseline and frequently dissected with semi-sheer panels, it was never uptight, just highly feminine. Yet, besides the elegant embroidery and artful grace, the abiding memory of this show was the family of blue – azure, cerulean, navy and sapphire. Even the wooden catwalk was a washed-out indigo.-Yahoonews