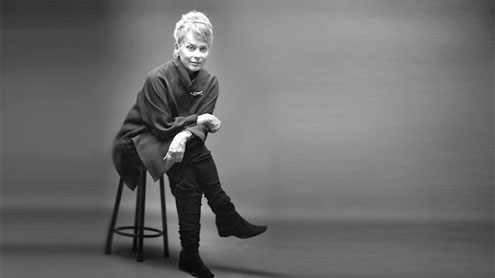 KARACHI: In a stately home tucked away in Clifton resides the doyenne of fashion, Maheen Khan. With 40 years to her credit, the style icon is famed for The House of Maheen, under which run The Embroidery House, Maheen and the recent addition of Gulabo.

Dressed in a stylish black top paired with casual brown pants, Maheen talks to The Express Tribune about her journey as a fashion designer and some projects in the pipeline.“I loved clothes as a little girl. I loved clothes to the extent that I made it a point to dress differently from everybody else,” says Maheen, adding that despite her having been in the fashion industry since 1972, her style sense has not “evolved”. “My style hasn’t evolved. I think I just kept up with the times,” she says simply. Indeed, Maheen’s style has stood the test of time and her signature look has managed to stay as contemporary as ever.

“My signature has stayed with me. I am a terrible businesswoman and I want to make what I want to make,” she says assertively, adding “I am as current today as I was in the 70s and I can prove it all with my shoots.”“I am old now, but I have always loved truck art,” she says, talking about the birth of Gulabo. “It was way back in 1983 when I had a yellow-coloured Datsun and I wanted to paint it in a similar fashion but my young children said no. But I believe that something stays in your mind forever, so now I finally ended up doing it.”

Maheen Khan was recently in the spotlight for her embroidered work in the movie Snow White and the Huntsman. She tells us how it all came about: “Diane Holmes trained me to do period embroidery of all sorts. She is the woman who is famous for costume designs for Jewel in the Crown,” she explains. Maheen has also done embroidery for numerous films like Sweeney Todd, Phantom of the Opera, Elizabeth I, Elizabeth II, Alexander and Golden Age apart from Snow White. The embroidery for the costumes of the upcoming movie Maleficent have also been done by Maheen. She explains that these projects have not been easy. “European embroidery is different from Pakistani embroidery. If they want an orange palette, they want a soft orange palette and if it is a red one, it has to be a soft red palette, unlike ours which is a very strong colour palette. It has been a huge learning curve for me.”

It seems that after all her achievements, the innovator inside Maheen is still restless. She tells us about her hopes for Studio M. “This will be my brain child. I want young textile designers to come in and bring their own work,” she said. “For me, when you sow a seed and nurture it, eventually years later it becomes a tree. Which is why I have sown a seed and am nurturing it. When it becomes a tree, I’ll call you!” she says brightly.

Surprisingly, in her philosophy, fashion is not all about glamour. For Maheen, it is more about hard work. “What is the fashion world? It’s not glamour, it is pure business. A fashion designer works an average of 12 hours a day. It’s a lot of hard work. It’s the icing on the cake, but people will only want to see the cake first. No one looks at the other aspect of fashion; they just see clothes on the rack and glamour on TV.”

At the end, Maheen says that while the trait of being fashionably different skipped one generation in her family, the streak has been witnessed in her granddaughter. “I am proud that my six-year-old granddaughter Rania is a fashion freak – nobody can choose her clothes for her. So Pakistan, watch out!”