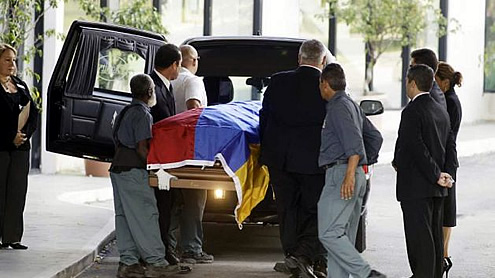 CARACAS, Venezuela — The remains of former President Carlos Andres Perez arrived in Venezuela on Tuesday, nine months after his death in Miami set off a bitter family feud over his final resting place. The embalmed body of Venezuela’s former leader had remained in limbo, kept for a time in cold storage in a Miami mortuary then in a Florida mausoleum, while the families of his former first lady and his longtime mistress battled in court over whether he should be buried in Venezuela or the United States. Edgar Zambrano, one of Perez’s former confidants, said a casket bearing the remains of the former Venezuelan president arrived on a plane that departed from Atlanta, Georgia.

Caracas Mayor Antonio Ledezma, a one-time friend of Perez who escorted the casket to Venezuela, lamented Perez’s death and his trip to bring back the ex-president’s remains. “It’s a burdensome mission: Retrieving a friend who left us,” Ledezma told Union Radio. “We must understand that friendship does not die along with the men who leave us physically.”

Dozens of relatives, friends and politicians, many of whom wore black suits and dresses, sang Venezuela’s national anthem as the coffin was carried from the airport to a hearse that transported the ex-president’s body to the headquarters of the Democratic Action political party in downtown Caracas. About 5,000 people jammed the street outside the party’s headquarters when the hearse arrived. Spirited supporters surrounding the vehicle sang Democratic Action’s theme song as the casket covered with a red, yellow and blue Venezuelan flag was carried into the building. Carolina Perez, one of the ex-president’s daughters, expressed gratitude for the demonstration of support.

“I’m so thankful,” she said. “It’s a wonderful feeling.” Henry Ramos, secretary-general of Democratic Action, praised Perez for “his great achievements” and “contribution to Venezuela’s democracy.” Perez will be buried on Thursday following a funeral Mass, Ramos said. His estranged wife, Blanca Rodriguez de Perez, insisted she had the right under Florida law as surviving spouse to bring her husband’s body home. But his longtime companion in Miami, Cecilia Matos, contended that Perez had vowed repeatedly never to return as long as political arch-nemesis Hugo Chavez was president.

After months of negotiations, a confidential settlement was reached in August that led to sending Perez back to his homeland. The settlement also covered papers, computer files, memorabilia and other presidential artifacts that Perez had in Miami when he died. A court-appointed curator has been cataloguing all of the material, but no details have been released on where it will end up. Perez was president from 1974-1979 and again from 1989-1993, surviving two failed coup attempts, including one led by Chavez. He left the country in 2000, facing the threat of arrest on corruption accusations, and did not return.

Alex Gonzalez, attorney for Perez’s estranged wife and family in Venezuela, said Monday that a public viewing is scheduled for Wednesday. There are no plans for Venezuelan government involvement or any kind of state funeral. Perez was born on Oct. 27, 1922, near the town of Rubio in western Tachira state. Perez started his political career as a youth leader and founder of Democratic Action, a center-left party that dominated politics for decades before Chavez’s rise to power in 1999. In his first term in the 1970s, Perez won popularity by nationalizing Venezuela’s oil industry, paying off foreign oil companies and then capitalizing on a period of prosperity that allowed his government to build subway lines and bankroll new social programs.

He became one of Latin America’s most prominent political leaders, popularly known after his initials as “CAP.” Venezuelans elected him for a second time in 1988, hoping for a return to good times after a decade of economic decline. But his popularity plunged when he tried to push through an economic austerity program that included increasing the subsidized prices of gasoline. Anger among the poor boiled over in riots in 1989 and more than 300 people were killed in the unrest known as the “Caracazo.” – Yahoonews