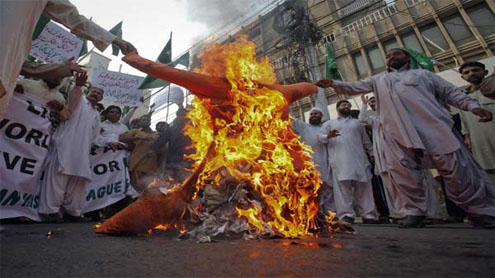 ISLAMABAD/KABUL (Reuters) – Fury spread in Pakistan Sunday over a NATO cross-border air attack that killed 24 Pakistani soldiers and could undermine the U.S. effort to wind up the war in Afghanistan.

Sunday night in Pakistan, more than 40 hours after the incident, many questions remained.NATO described the killings as a “tragic unintended incident” and said an investigation was underway. A Western official and an Afghan security official who requested anonymity said NATO troops were responding to fire from across the border.It’s possible both explanations are correct: that a retaliatory attack by NATO troops took a tragic, mistaken turn in harsh terrain where identifying friend and foe can be difficult.”All of this is extremely murky and needs to be investigated,” said a U.S. official in Washington, who spoke on condition of anonymity. “Our goal today is … that the investigation gets mounted in a way that is confidence-building on all sides.”

Militants often attack from Pakistani soil or flee after combat across a porous border that NATO-led troops, under their United Nations mandate, cannot cross.What is clear is the incident could undermine U.S. efforts to improve ties with Pakistan so that the regional power helps stabilize Afghanistan before NATO combat troops go home by the end of 2014.The attack was the latest perceived provocation by the United States, which infuriated Pakistan’s powerful military with a unilateral special forces raid that killed al Qaeda leader Osama bin Laden in May.Thousands gathered outside the American consulate in the city of Karachi to protest against the NATO attack.A Reuters reporter at the scene said the angry crowd shouted “Down with America.” One young man climbed on the wall surrounding the heavily fortified compound and attached a Pakistani flag to barbed wire.

“America is attacking our borders. The government should immediately break ties with it,” said Naseema Baluch, a housewife attending the demonstration. “America wants to occupy our country but we will not let it do that.”Pakistan buried the troops killed in the attack Sunday. Television stations showed coffins draped in green and white Pakistani flags in a prayer ceremony at the headquarters of the regional command in Peshawar, attended by army chief General Ashfaq Kayani.The NATO attack highlights the difficulties faced by the United States as it tries to secure the unruly border area that is home to some of the world’s most dangerous militant groups who have mastered the harsh mountainous landscape.Around 40 troops were stationed at the outposts at the time of the attack, military sources said.Militants targeting NATO forces have long taken advantage of the fact that the alliance’s mandate ends at the border to either attack from within Pakistan or flee to relative safety after an attack.

Three Pakistani soldiers were killed last year by NATO gunships. NATO said then that its forces had mistaken warning shots from Pakistani forces for a militant attack.In the latest incident, a Western official and a senior Afghan security official said NATO and Afghan forces had come under fire from across the border with Pakistan before NATO aircraft attacked a Pakistani army post, killing the soldiers.”They came under cross-border fire,” the Western official said, without identifying the source of the fire.The Afghan official said troops had come under fire from inside Pakistan as they were descending from helicopters, which had returned fire.Both officials asked not to be named because the attack is so sensitive.Pakistan has said the attack was an unprovoked assault and has said it reserves the right to retaliate.

U.S. and NATO officials are trying to defuse tensions but the soldiers’ deaths are testing a bad marriage of convenience between Washington and Islamabad.Many Pakistanis believe their army is fighting a war against militants that only serves Western interests.Foreign Minister Hina Rabbani Khar spoke with U.S. Secretary of State Hillary Clinton by telephone early Sunday to convey “the deep sense of rage felt across Pakistan” and warned that the incident could undermine efforts to improve relations, the Foreign Ministry said in a statement.Pakistan shut down NATO supply routes into Afghanistan in retaliation for the incident, the worst of its kind since Islamabad uneasily allied itself with Washington following the September 11, 2001, attacks on the United States.Pakistan is the route for nearly half of NATO supplies shipped overland to its troops in Afghanistan. Land shipments account for about two thirds of the alliance’s cargo.A similar incident on Sept 30, 2010, which killed two Pakistani service personnel, led to the closure of one of NATO’s supply routes through Pakistan for 10 days.

U.S. ties with Pakistan have suffered several big setbacks starting with the unilateral U.S. special forces raid in May that killed bin Laden in a Pakistani town where he had apparently been living for years.Pakistan condemned the secret operation as a flagrant violation of its sovereignty, while suspicions arose in Washington that members of Pakistan’s military intelligence had harbored the al Qaeda leader.The military came under unprecedented criticism from both Pakistanis who said it failed to protect the country and American officials who said bin Laden’s presence was proof the country was an unreliable ally in the war on militancy.Pakistan’s army, one of the world’s largest, may see the NATO incursion from Afghanistan as a chance to reassert itself, especially since the deaths of the soldiers are likely to unite generals and politicians, whose ties are normally uneasy.Pakistan’s jailing of a CIA contractor, Raymond Davis, and U.S. accusations that Pakistan backed a militant attack on the U.S. embassy in Kabul have added to the tensions.

“From Raymond Davis and his gun slinging in the streets of Lahore to the Osama bin Laden incident, and now to the firing on Pakistani soldiers on the volatile Pakistan-Afghan border, things hardly seem able to get any worse,” said the Daily Times.Islamabad depends on billions in U.S. aid and Washington believes Pakistan can help it bring about peace in Afghanistan.But it is constantly battling Anti-American sentiment over everything from U.S. drone aircraft strikes to Washington’s calls for economic reforms.”We should end our friendship with America. It’s better to have animosity with America than friendship. It’s nobody’s friend,” said laborer Sameer Baluch.In Karachi, dozens of truck drivers who should have been transporting supplies to Afghanistan were idle.
Taj Malli braves the threat of Taliban attacks to deliver supplies to Afghanistan so that he can support his children. But he thinks it is time to block the route permanently in protest.

“Pakistan is more important than money. The government must stop all supplies to NATO so that they realize the importance of Pakistan,” he said.But some Pakistanis doubt their leaders have the resolve to challenge the United States.”This government is cowardly. It will do nothing,” said Peshawar shopkeeper Sabir Khan. “Similar attacks happened in the past, but what have they done?” News.Yahoo