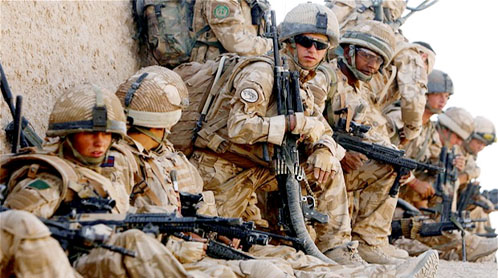 Britain has signalled the start of the withdrawal of its vast military infrastructure from Afghanistan with the signing of a crucial new defence pact which should ensure safe passage home for billions of pounds worth of vital equipment.

Philip Hammond, the Defence Secretary, signed a new defence co-operation agreement with Kazakhstan which the British Government hopes will enable an estimated £4 billion of equipment – including tanks and armoured personnel carriers – to be shipped out of northern Afghanistan.Britain and its Nato allies have been desperately seeking alternative routes following Pakistan’s decision to close the vital supply route from Karachi to Afghanistan. Pakistan closed the border crossing after the Americans mistakenly killed 24 Pakistani troops last November.

Relations between Washington and Pakistan were already tense following last year’s successful raid by U.S. Navy Seals to kill Osama bin Laden, which was carried out without Islamabad’s knowledge.While diplomats expect Pakistan to reopen the border at some point in the future, Britain has decided that it can no longer rely on Pakistan’s co-operation as it begins the immensely complex operation of withdrawing troops from Afghanistan by the end of 2014, when all Nato combat operations are due to cease.

Mr Hammond now hopes to open a new supply route through Central Asia following the signing of the pact with Kazakhstan’s defence ministry that guarantees Britain air transit rights over the massive Central Asian republic, a country which is equal in size to the whole of Western Europe. The Defence Secretary hopes a “reverse transiting agreement” will result in Kazakhstan also providing permission for military equipment such as tanks and armoured personnel carriers to be carried by train on a 4,000-mile journey from northern Afghanistan to the Baltic, where they will then be shipped back to Britain.

On Tuesday he will be having talks in neighbouring Uzbekistan in the hope of agreeing similar transit rights. In addition Nick Harvey, the Armed Forces Minister, is travelling this week to Kyrgystan, Tajikistan and Turkmenistan to explore the possibility of negotiating similar deals.The Ministry of Defence estimates that Britain has a total of 3,000 armoured vehicles and 11,000 containers of equipment worth an estimated £4 billion based in Afghanistan that needs to be shipped home as the British Government signals the end of its military involvement in the long-running Afghan conflict.

These include Warrior armoured personnel carriers, as well as the new generation of protected vehicles such as Foxhound and Coyote, which have been acquired to replace the flawed Snatch Land Rover.While it is possible some of the equipment may still be shipped through Pakistan, the MOD wants to set up a network of alternative routes to ensure the equipment returns safely to Britain and is not hijacked by Taliban militants.

“This is an enormous logistical challenge,” Mr Hammond told the Daily Telegraph following talks at Kazakhstan’s defence ministry in Astana yesterday. “The pressure on existing lines of communication is going to be very significant, which is why it is so important for us to open a new line of communication through the north.”Mr Hammond also denied recent reports that the MOD was planning to abandon billions of pounds worth of military equipment in Afghanistan because it was too expensive to bring it home.

“There has to be a cost-benefit analysis on every bit of kit, but the majority of armoured vehicles will be brought back,” he said.The cost of shipping the equipment home is estimated at more than £100 million. By shipping the equipment through Central Asia rather than Pakistan Mr Hammond believes it stands less chance of being attacked by Taliban militants, as often happens on the border crossing between Pakistan and Afghanistan.

“The Taliban have made clear that their guidance to Taliban fighters is not to attack Nato convoys passing through the north,” he said.Military officials expect the operation to begin shipping the equipment back to Britain will commence in the summer and take two years. “We want to have a steady flow of equipment coming back to Britain rather than bring it all back in one mad rush,” said a senior officer.

The need to find new supply routes has intensified following the Obama administration’s decision to end combat operations from next year. The U.S. has an estimated 49,000 armoured vehicles and 100,000 shipping containers worth an estimated $49 billion that needs to be shipped back to the U.S. Hillary Clinton, the U.S. Secretary of State, has made two recent visits to Kazakhstan to negotiate separate transit agreements for Washington.

The urgency with which Britain and its allies are searching for alternative exit routes from Afghanistan will inevitably raise concerns that Nato is ending its military mission before the campaign against the Taliban has been completed, thereby allowing the Taliban to return to power once Nato has left.But Mr Hammond rejected claims Nato was undertaking an undignified retreat from Afghanistan. “Nato is in this for the long haul, even after we finish combat operations,” he said. “We are going to pass control to an enlarged and better trained Afghan force.” – Thetelegraph