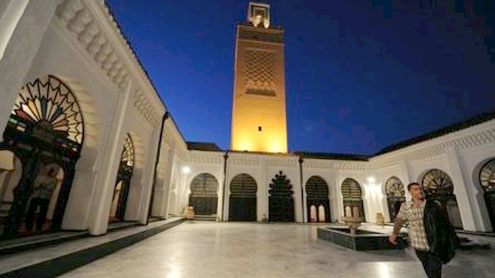 ALGIERS: Algeria signed a deal with a Chinese construction giant on Tuesday for the building of a vast new one billion euro mosque that is expected to be the third largest in the world.

Religious Affairs Minister Bouabdallah Ghlamallah declared that the grand mosque which will overlook the seafront in the east of Algiers would be a “one-of-a-kind”.“There will be nothing like it in the world — religiously, touristically and economically,” he said as the deal was signed with China State Construction Engineering Corporation (CSCEC).The mega mosque will sit on 20 hectares (49 acres) of land in the Mohammadia area of the capital, with its minaret soaring soaring 270 metres (almost 900 feet) into the sky.

The one billion euro ($1.3-billion) house of worship will be able to 120,000 people and will also feature a library containing one million works and seating for 2,000, as well as a museum and a research centre.It will be the world’s third largest mosque after those in Mecca and and Medina in Saudi Arabia.Algerian President Abdelaziz Bouteflika “wants to leave his mark” through the building of the mosque, which will also become the fourth grand mosque in Algiers, Ghlamallah added.

“Work will start today after the signing of the contract and should be completed in 42 months,” the minister said.The Chinese company, which has been in Algeria for the past 30 years and built the five largest hotels in the country, beat out a Lebanese-Italian concern and an Algerian-Spanish company for the contract.

CSCEC was one of four Chinese companies that were disbarred in 2009 from bidding for World Bank financed projects for periods ranging from five to eight years after a corruption investigation in the Philippines, according to a World Bank stateemt.In the case of CSCEC the World Bank recommended that the exclusion period run until 2015.Algiers currently has three grand mosques: Djamaa el-Kebir, built in the 11th century; Djamaa el-Djedid, built in 1660; and the Ketchaoua, at the foot of the Casbah, also built during the Ottoman rule in the 17th century. Khaleejnews