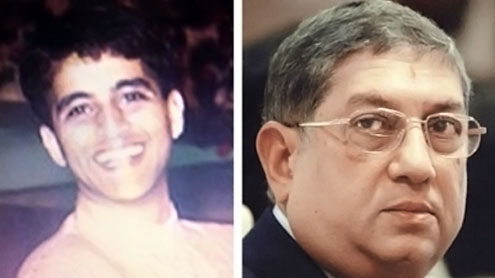 MUMBAI: BCCI chief N Srinivasan’s son Ashwin got into a brawl after he was refused a drink during curfew hours in a Mumbai pub early Tuesday.

He was arrested for punching and kicking a police constable. Later, he was produced in court and released on bail.Ashwin, 40, and his friend, Avi Mukharjee, 35, went to the pub on the fourth floor of a commercial building in Bandra (W). The bar stopped serving alcohol after 1.30am. However, Ashwin insisted the staff serve him, but bar employees refused. They requested him to pay the Rs 28,000 bill and leave.

Ashwin and Avi argued with the staff, dropped names and allegedly abused them. Ashwin told the staff about his family and that he drove to the bar in a BMW. When he continued to press for liquor, the bar management informed the police.Around 2.15am, two policemen came to the bar, asked Ashwin to settle the bill and leave. Ashwin allegedly abused the policemen too. He kicked one of the constables and punched him on his face, the police said. – TOI

Venus to cross sun’s face in a lifetime event

Venus to cross sun’s face in a lifetime event