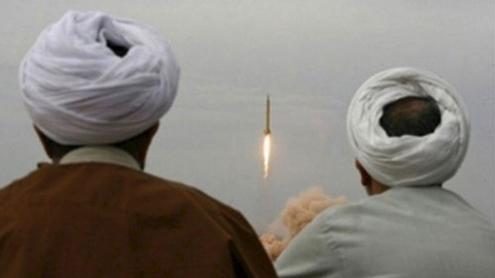 With the May 23 negotiations in Iraq failing to persuade Iran to give up its illicit nuclear program, Iranian leaders have returned to threats of war — including the provocative statement that their missiles can reach every U.S. military base in the Middle East, and a call to halt all nuclear negotiations with the West.

On Saturday, Iranian Brig. Gen. Hossein Salami threatened that all “enemy” bases in the region are vulnerable to Iranian attack. “Wherever you imagine these bases are, they are within the reach of Iranian missiles,” he said, according to Fars News Agency, the media outlet run by the powerful Revolutionary Guard Corps.  The news report said half of Iran’s missile capability is still unknown to the West. Also on Saturday, the editor-in-chief of Iran’s conservative Keyhan newspaper — which generally reflects the Iranian regime’s point of view – penned an editorial calling for a full halt to negotiations on the Iranian nuclear program. “After two days of negotiations in Baghdad,” Hossein Shariatmadari wrote, ”it seems that the negotiations only serve the West and its political need with their current economic problems. The Baghdad negotiations showed that the West has not changed its attitude and still demands its illegal requests regarding Iran’s nuclear program.” Shariatmadari has said in the past that Iran should acknowledge to Western nations that it has nuclear weapons capabilities. On Saturday he suggested the 5+1 nations only want to continue negotiations in order to keep oil prices steady and avoid a shock to an already-teetering global economy.

“It can be assumed that the upcoming negotiations to be held in Moscow will also not result in much and our presence will only secure the need of the enemy,” he said. “Therefore, it’s best that Iran does not participate in any future negotiation, be it in Moscow or elsewhere.” As the Iranian delegation negotiated with the representatives of the 5+1 in Baghdad last week, Iranian supreme leader Ayatollah Ali Khamenei told Revolutionary Guard officers graduating from Imam Hussein University that Western nations’ days as global superpowers are numbered. “The oppressive powers, despite their show of force, are on the track of destruction. … Soon the future will smile on the Iranian nation,” he predicted, according to Keyhan. This latest instance of saber-rattling during a university graduation was a sequel to equally provocative comments from Iranian Rear Admiral Ali Fadavi in April, during a speech at the University of Yazd. “The power of our naval forces is such that we have a presence in all the waters of the world and, if needed, we can move to within three miles of New York,” Fadavi boasted. The Revolutionary Guards have successfully launched ballistic missiles from naval ships, and have stated that they have vessels equipped with long-range ballistic missiles.

The Guards have already mapped out the U.S. bases in the region as part of a wartime contingency plan to disrupt the movement of air and ground forces. Iran’s ballistic missiles can reach targets more than 1,250 miles away, potentially putting U.S. bases in Afghanistan, Bahrain, Kuwait, Qatar and parts of other countries within Tehran’s firing range. An International Atomic Energy Agency report released Friday concluded that Iran has amassed 6.2 tons of uranium enriched to a low level of 3.5 percent purity. If enriched further, that amount would be enough for five nuclear bombs, the Institute for Science and International Security declared on Friday. Iran, the IAEA wrote, also has doubled its highly enriched uranium stockpile — 20 percent pure fissile material — to a total of 145 kilograms. The report indicated that inspectors had also recorded “the presence of particles” of 27 percent-enriched uranium at Iran’s Fordow facility. The 5+1 nations negotiating with Iran at the five permanent members of the United Nations Security Council — Britain, China, France, Russia and the United States — plus Germany. They have asked Iran to halt its enrichment process at the 20 percent level and allow inspectors full access to suspect sites, including the Parchin military site where the UN suspects Iran is carrying out nuclear arms-related tests.

Iran has refused, but Iranian hard-line cleric Ayatollah Ahmad Khatami stated in his Friday prayer sermon that Iran will not relinquish its right to 20 percent enrichment, which is a short step from weapons-grade uranium.
Keyhan reported Monday that the 5+1 talks produced an awkward moment on May 23 when Dr. Saeed Jalili, secretary of the Supreme National Security Council of Iran, asked his negotiating adversaries if they were aware of the significance to Iranians of the date and the location where they were negotiating. They weren’t.
“Thirty years ago today we took back the city of Khorramshahr from Saddam [Hussein],” Jalili said. During that 8-year-war, he explained, the same 5+1 countries provided support to the Iraqi dictator. “We were alone. … Where is Saddam now and where do we stand in the region? Today on the anniversary of the freedom of Khorramshahr … we are here in Saddam’s palace.” “When the world stood on one side and the Islamic republic [of Iran] on the other,” Jalili concluded, “we did not surrender to the West and East’s illogical demands. And so do not expect us to surrender now to the current illogical demands.”

All this comes as The Washington Post reported Sunday that U.S. diplomats were the targets of Iran-based assassination plots. U.S. officials and their counterparts in the Middle East, according to the Post, see the attempts as part of a 13-month plan, hatched by operatives linked to Iran, to kill foreign diplomats in at least seven nations. And barely a week ago, Iran’s top military commander said his country was fully committed to destroying Israel. “The Iranian nation is standing for its cause, and that is the full annihilation of Israel,” Maj. Gen. Hassan Firouzabadi, the Iranian military’s chief of staff, said in a speech to a May 20 defense gathering. Reza Kahlili is a pseudonym for a former CIA operative in Iran’s Revolutionary Guard and the author of the award winning book ”A Time to Betray.” He is a senior Fellow with EMPact America, a member of the Task Force on National and Homeland Security and teaches at the U.S.-Yahoonews