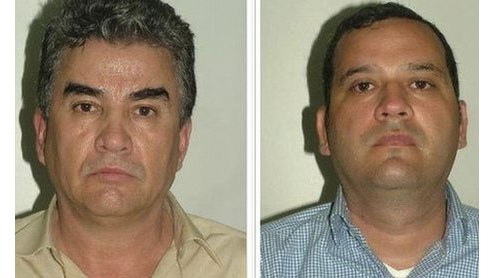 Four suspected members of Mexico’s feared Sinaloa drug cartel have been arrested in Spain, while allegedly trying to set up a European operation.

Jesus Gutierrez Guzman, a cousin of Sinaloa’s fugitive leader Joaquin “Shorty” Guzman, is among the four detained near hotels in central Madrid.”Our country was going to be used as a point of entry for large shipments of narcotics,” the interior ministry said.The arrests were part of a joint operation with the FBI.Jesus Gutierrez Guzman and the three others – named as Rafael Humberto Celaya Valenzuela, Samuel Zazueta Valenzuela and Jesus Gonzalo Palazuelos Soto – are all wanted in America over allegations of drug-trafficking and money-laundering.

At the end of July, some 373kg of cocaine was discovered in a container which arrived in the southern Spanish port of Algeciras.The Sinaloa cartel is often described as the most powerful drug trafficking organisation in the Western Hemisphere.It controls much of the flow of cocaine, marijuana and methamphetamines into the US via air, land and sea, and is believed to have links in as many as 50 countries.

Analysts say it was only a matter of time before the cartel tried to expand into Europe and Spain was the natural choice as an entry point, given the common language and its sea ports.Shorty Guzman was jailed in 1993 but escaped his maximum-security prison in a laundry basket eight years later, embarrassing and eluding the authorities ever since.The US state department has offered a reward of up to $5m (£3.2m; 4m euros) for information leading to his arrest. – BBC