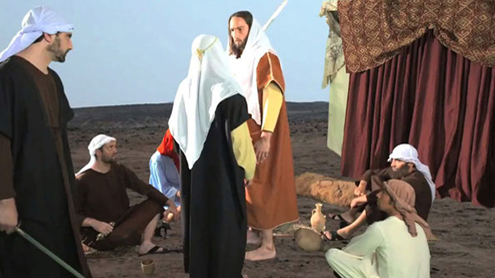 Egyptian authorities have charged seven Coptic Christians living in the United States and a Florida pastor with insulting Islam and inciting sectarian strife for their alleged links to an online video that has enraged much of the Muslim world.

Egypt’s public prosecutor announced the charges Tuesday, the latest development in the deadly backlash against the low-budget, amateurish 14-minute movie trailer produced privately in the United States and posted on YouTube.The clip from “The Innocence of Muslims” mocks the Muslim Prophet Mohammed as a womanizer, child molester and killer.”Innocence of Muslims” was an obscure Internet video until September 11, when rioters, seizing on it, breached the U.S. Embassy in Cairo. Protesters also attacked the U.S. Consulate in Benghazi, Libya, killing U.S. Ambassador Chris Stevens and three other Americans.

The charges — largely symbolic because the accused all live outside Egypt — name alleged filmmaker Nakoula Basseley Nakoula, who is identified by Egyptian officials as Elia Bassili.Reports that Nakoula is a Coptic Christian have raised concern about a possible backlash against the minority religious group in Egypt, where tensions between Copts and Muslims have risen recently.Egypt also charged Morris Sadek, who is believed to have posted the clip to YouTube.

The Florida pastor charged is Terry Jones, who was allegedly contacted by the filmmaker to help promote the video. Jones sparked some protests in Muslim countries last year when he staged a trial of Islam at his church.The others accused were identified as Morcos Aziz; Fikri Zokloma, also known as Esmat Zokloma; Nabil Bissada; Nahed Metwali; and Nader Nicola. Aside from Nakoula, who lives in California, and Jones in Florida, it was not clear where the others live in the United States.In addition to charges of insulting the Islamic religion, insulting Mohammed and inciting sectarian strife, all eight are charged with harming national unity and spreading false information, according to Adel Saaed, a spokesman for the prosecutor’s office.

Egyptian authorities added the names to their airport watch list.Sherif Doss, head of the Egyptian Coptic Association, said the accused Copts have created their own “cult-like” organization in the United States, have appointed their own minister and are “disregarding any church or religious norms.As part of the fallout from the video, al Qaeda’s affiliate in North Africa on Tuesday urged Muslims in the region to kill U.S. government representatives and called the death of Stevens a “gift.””We encourage all Muslims to continue to demonstrate and escalate their protests … and to kill their (American) ambassadors and representatives or to expel them to cleanse our land from their wickedness,” said the statement from al Qaeda in the Islamic Maghreb.

The group called last week’s killing of Stevens “the best gift you (can) give to his arrogant and unjust administration.”State Department spokeswoman Victoria Nuland reiterated the Obama administration’s stance that video, which she called “reprehensible,” was no justification for violence.U.S. and Libyan officials have held a series of high-level meetings to “assess what went wrong” in Benghazi, a senior Libyan official said Tuesday. Some of the U.S. officials had flown in for the meetings, which included security experts.

Following the attack, Libya suspected an increase in U.S. drone activity over eastern portions of the country and were worried the Obama administration would take military action because of domestic political considerations, the official told CNN. Mohamed al-Magariaf, newly elected president of Libya’s parliament, spoke with the White House “to contain the situation,” the official said.The official said the government urged the Americans to work together “in full partnership” because any military action during this “fragile and sensitive situation” would give “an excuse” to the two main threats to the state: extremists and loyalists to the deposed Gadhafi regime.

The official expressed concern with the deteriorating regional picture.”They (the United States) are losing Egypt, if they lose Libya … they and we cannot afford to lose our partnership.”CNN correspondent Brianna Keilar pressed the White House on Tuesday on whether the Libya attack was planned or spontaneous.”We saw no evidence to back up claims by others that this was a preplanned or premeditated attack,” White House spokesman Jay Carney said. “But there is a lot that is under investigation here, and as more facts come to light, if they change that assessment, we’ll make that clear.”

Libya has taken steps to arrest those responsible for last week’s deadly consulate attack, bringing in dozens for questioning over the weekend, Libyan officials said.The exact number of arrests was unclear. One Libyan official said those arrested included suspects from Mali and Algeria as well as al Qaeda sympathizers.Secretary of State Hillary Clinton said Tuesday that FBI agents had arrived in Tripoli. They had delayed entering the country a few days while the situation remained especially volatile.The United States is looking at security at all diplomatic posts and will augment it at specific locations if necessary, Clinton told reporters.A man who allowed his studio to be used for 10 days for the making of “Innocence of Muslims” said he was misled by the person behind the film.

Joseph Nassralla, president of Media for Christ, based in Southern California, said the ensuing controversy over the anti-Islam film brought him death threats and forced him into hiding.In a statement, Nassralla criticized Nakoula, the alleged filmmaker.Nakoula told him he was making a movie about Christian persecution that “would examine the culture of the desert and how it is related to what is going on right now,” said Nassralla.”Nakoula altered the film without anyone’s knowledge, changing its entire focus and dubbing in new dialogue …” said Nassralla, who who also runs a satellite TV station in Los Angeles. “The final product … bore no resemblance to the film I thought he was making, or the film the actors thought they were creating. We were shocked.”

Nakoula denied that he made the film, according to Bishop Serapion, the head of the Coptic Orthodox Diocese of Los Angeles, citing a phone conversation with him last week. At a news conference Monday, the Coptic leader condemned violence by protesters which, he said, “only serves to continue the hate.”Nassralla said his interest is calling attention to “bloody persecution of the Copts.” He said his only involvement in the finished film was allowing use of his facilities.Nassralla’s statement was provided to CNN by blogger Pamela Geller, who posted it on her website after receiving it from Nassralla. Geller is author of “Stop the Islamization of America.”

Taliban-allied insurgent groups claimed responsibility for two suicide attacks that killed 13 people, including eight South Africans, in Afghanistan. The first attack was a response to the film, one of the groups said.Hezb-e-Islami Gulbuddin, a group allied with the Taliban, said a 22-year-old woman drove a car packed with 660 pounds (300 kilograms) of explosives into a van on a road leading to Kabul International Airport.Eleven others were wounded in the attack, the Afghan Interior Ministry said.

In Kunar province, the Taliban claimed responsibility for a suicide attack that killed an Afghan civilian and wounded four people, including three International Security Assistance Force troops, according to Wasifullah Wasifi, a spokesman for the provincial governor’s office.State Department spokeswoman Nuland on Tuesday described the first Afghan attack as “piling on.”

“We are seeing a lot of extremist activity trying to exploit the sentiments from this video to gin up folks to violence and try to use that as an excuse for things that might otherwise have been planned for their otherwise rejectionist agendas,” Nuland said. “So, that is very concerning, this sort of spoiler, pile-on agenda that is happening now.”

The escalating tensions have spilled into NATO military operations in the central Asia nation, prompting the alliance to order its troops to adjust joint operations with Afghan security forces to minimize attacks on them by their local allies.

“Recent events outside of and inside Afghanistan related to the ‘Innocence of Muslims’ video plus the conduct of recent insider attacks have given cause for ISAF troops to exercise increased vigilance and carefully review all activities and interactions with the local population,” a spokeswoman for NATO’s International Security Assistance Force said. The operations with Afghan forces could increase as the “threat level” goes down, she said.

• About 100 demonstrators gathered Tuesday near a U.S. diplomatic facility in Medan, Indonesia, the U.S. Embassy in Jakarta reported on its website. Indonesian authorities were deploying about 150 police officers to the Medan protest and adding security outside the U.S. facility in Jakarta, although no protests were taking place there, the embassy said.

• In Indian-administered Kashmir, a general strike flared, shutting down businesses, public transport and most government operations, with reports of sporadic violence. A coalition of religious parties and separatist groups called the strike as a protest against the video.

• In Thailand, a peaceful crowd protested in heavy rain in front of the U.S. Embassy in Bangkok for about 90 minutes Tuesday, the Bangkok Post newspaper reported. No violence was reported, the newspaper said.

U.S. officials were aware of the planned protest and made plans to close the building to the public and send home nonessential personnel, the embassy said on its website.

• In Iran, students at universities staged protest rallies Tuesday against the film and the United States. They chanted “Death to the U.S.” and “Death to Israel,” the semiofficial Fars News Agency reported. – CNN

Swaying to the South Pacific beat: William and Kate don grass skirts as they join the tribal dance