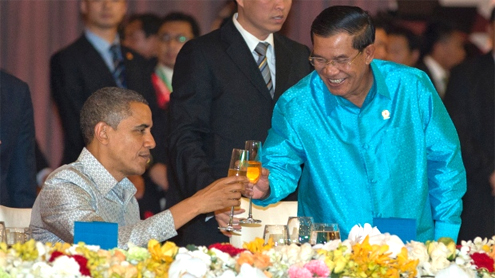 President Barack Obama arrived in Cambodia on Monday having just won four more years in office, but that is nothing compared to his host, Hun Sen.

The 60-year-old Cambodian prime minister has held power since Ronald Reagan was in the White House, and says he’s not stepping down until he is 90.Hun Sen is known as one of Asia’s most Machiavellian politicians, with a knack for making sure his rivals end up in jail or in exile. A laudatory biography is subtitled “Strongman of Cambodia,” and some would say that’s putting it mildly.Through his country’s civil wars, a U.N. peace process and several elections, the one-time communist cadre has always managed to come out on top. Over the last decade, he has also overseen modest economic growth and stability in a country plagued by desperate poverty and nearly destroyed by the Khmer Rouge’s “killing fields.”

Obama is making the first visit ever by a U.S. president to Cambodia because it is hosting the annual East Asia Summit. He went straight from the airport to a meeting with Hun Sen that White House officials described as tense, with Obama emphasizing his concerns about Cambodia’s human rights situation.According to U.S. Deputy National Security Adviser Ben Rhodes, Hun Sen defended his record, telling the president that Cambodia has a unique set of circumstances that influence its policies and practices, and expressed a desire to deepen his country’s ties with the U.S.

Hun Sen “is intelligent, combative, tactical, and self-absorbed,” says historian David Chandler, a Cambodia expert at Australia’s Monash University and a critic of Hun Sen’s rule.These days, Hun Sen has styled himself as an elder statesman, and he is anxious to win international respectability to go along with the economic growth. Despite concerns over his autocratic style and human rights lapses, the canny Hun Sen has managed to keep flowing the international aid that still accounts for a major part of Cambodia’s national budget.

He also has apparent populist appeal. A poll of Cambodians taken in December 2011 by the International Republican Institute — a nonprofit organization that promotes democracy around the world — found that 81 percent of some 2,000 respondents said Cambodia is “generally headed in the right direction.”Lao Mong Hay, an independent political analyst in Cambodia, thinks the secret to his success is simple: “Who dares, wins. He dares and he wins.”But many critics say that too often what Hun Sen dares to do is use brute force and manipulation of the courts to maintain his hold on power.

“Hun Sen’s violent and authoritarian rule over more than two decades has resulted in countless killings and other serious abuses that have gone unpunished,” New York-based Human Rights Watch said in a recent report. Labor organizers, politicians, journalists and environmentalists have been among those who have died violently over the years.

For all that, many Cambodians still credit Hun Sen with dragging their country out of the abyss into which it had fallen under the Khmer Rouge. The communist regime came to power in the 1970s and engaged in a systematic genocide that left 1.7 million dead in its attempt to create a pure agrarian society. By the time Vietnam invaded in 1979 to oust the regime, Cambodia was a broken shell of a country: every social, political and cultural institution was in ruins.Born to a peasant family in east-central Cambodia, Hun Sen initially fought with the Khmer Rouge against a pro-American government. He lost an eye in combat. But he defected to Vietnam in 1977 and accompanied the Vietnamese invasion. By 1985, he had been named prime minister.

Yet, for years after the Khmer Rouge regime fell, the United States continued to officially recognize its leaders, who had fled and resumed guerrilla warfare, as Cambodia’s legitimate representatives in the U.N. That fact still rankles Hun Sen, who often raises it when feeling aggrieved by U.S. policy.He has made China his key ally, with Beijing happy to pour in aid and investment for a reliable political partner in Southeast Asia. A sign on the exterior wall of Hen Sen’s Peace Palace government offices, where the summit is being held, welcomed the arrival of Chinese Premier Wen Jiabao, but no similar sign heralded Obama’s arrival.

Hun Sen’s reputation for violence owes much to the fact that he staged a 1997 coup against his own coalition government. Forces loyal to him defeated those of his co-prime minister — whose party had actually won elections four years previously — putting Hun Sen once again in full control.By hook or crook, he has remained in power ever since, winning several elections.In recent years, Hun Sen’s opponents have been more likely to stand before a judge than stare down the barrel of a gun, human rights groups say.

Last month, a court sentenced 71-year-old Mam Sonando, owner of a radio station that is one of the country’s few free media voices, to 20 years in prison on insurrection charges that critics say were trumped up to silence him.Opposition leader Sam Rainsy — the sole Cambodian politician with the charisma and resources to present any real challenge to Hun Sen — is in self-imposed exile to avoid 12 years in prison from convictions critics say represented similar political persecution.Unless Hun Sen sees an advantage to having him pardoned, Sam Rainsy will likely be shut out of next year’s general election and his party will lose its best campaigner.

Economic development is a particular point of pride for Hun Sen’s government, bearing in mind the low point growth started from — the Khmer Rouge had even abolished the use of money.Cabinet spokesman Phay Siphan points out that Cambodia has experienced steady growth for the past 10 years, and expects to attain a per-capita income topping $1,000 in 2013.He calls Hun Sen “the right man at the right time” for a transition to “free markets and multiparty liberal democracy.” The government has passed Cambodia’s first anti-corruption law, Phay Siphan said, and now requires the disclosures of officials’ assets.

That law, though, has not stopped rampant family business dealings, cronyism and corruption. Opposition politicians and watchdog groups such as Global Witness accuse Hun Sen of overseeing the selloffs of the country’s forests to rapacious logging companies — displacing masses of small farmers.“Cambodia today is a country for sale,” says Mu Sochua, a lawmaker from Sam Rainsy’s opposition Cambodian National Rescue party.

But opponents and activists have little power to change the government, and even Hun Sen may be as beholden to his nation’s economic interests as he is in control of them. “I’m not so sure he is their master or their puppet,” says analyst Lao Mong Hay.Even so, few doubt the outcome when Hun Sen faces a general election next year.As Hun Sen put it ahead of the last election in 2008: “I wish to state it very clearly this way: No one can defeat Hun Sen. Only Hun Sen alone can defeat Hun Sen.” – Khaleejnews