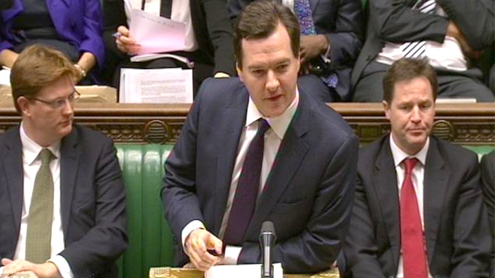 George Osborne targeted workers at the top, middle and bottom of the financial heap yesterday with a raft of money-saving measures.

He ordered a tax raid on higher earners’ pensions, warning that Britain is only a third of the way through its age of austerity.He dragged 400,000 more workers into the 40p tax rate by raising the earnings threshold by just one per cent – below the rate of inflation.And the canny Chancellor dared Labour to oppose real-terms cuts in welfare payments to millions of unemployed and lower-income families for the next three years, declaring himself on the side of those ‘who want to work hard and get on’.

In his Autumn Statement, Mr Osborne admitted higher government borrowing and lower-than-expected economic growth meant spending cuts and tax rises designed to balance the books would have to be extended by an extra year, to 2018.Official figures showed that the hardest hit by his measures will be the top ten per cent and bottom ten per cent of earners.

In a boost for Middle Britain, the Chancellor announced a surprise increase in the personal income tax allowance, meaning the first £9,440 earned will be tax free.Mr Osborne won his loudest cheers as he told MPs he was scrapping a 3p increase in fuel duty pencilled in for January.But official figures show that as a result of all the tax, benefit and public spending changes implemented by the Coalition since 2010, the average household will be around £1,140 worse off by 2015, with the top fifth of households £2,370 worse off.

In other key moves, corporation tax was cut by an extra penny to 21p by 2014, compared with 28p when the Coalition came to power, and small businesses were given investment tax breaks.From 2014, lifetime pension relief allowance will fall from £1.5million to £1.25million and annual allowance will be cut from £50,000 to £40,000.The point at which debt is predicted to begin falling was delayed by a year to 2016. Estimates for public-sector job losses were increased to 1.1million, though twice as many jobs will be created in the private sector.

Heads will be given discretion over teachers’ pay in a move which infuriated trade unions.Basic state pension will rise by 2.5 per cent next year to £110.15 a week.The Chancellor said that as a result of his plans, government spending as share of national income would fall from 48 per cent in 2009/10 under Labour to 39.5 per cent in 2017/18.But he was forced to concede that there is ‘much more to do’ to restore the public finances to health against a backdrop of gloomy economic data.

Mr Osborne conceded the budget deficit was ‘still far too high for comfort’, though he wrong footed Shadow Chancellor Ed Balls by announcing that having already been cut by 25 per cent, the deficit will unexpectedly fall again this year – thanks in part to a £3.5billion windfall from the sale of the 4G mobile phone spectrum.He used a fresh round of spending cuts from day-to-day Whitehall budgets to pay for investment in projects designed to stimulate the economy.

There will be a £5billion investment programme in new roads, 100 new free schools and academies, science laboratories, ultra-fast broadband and further education colleges.‘We cannot relax our efforts to make our economy safe,’ the Chancellor told MPs. ‘But Britain is heading in the right direction. The road is hard but we’re making progress. It’s taking time, but the British economy is healing.‘As well as a tax system where the richest pay their fair share, we have to have a welfare system that is fair to the working people who pay for it.’

Mr Osborne announced that he is to change the law to break a link between inflation and the ballooning welfare bill, with out-of-work benefits rising by just one per cent for the next three years.Under previous rules, benefits were increased every April by the inflation rate in the previous September, which this year was 2.2 per cent.Mr Osborne said that as a result, the incomes of those on out-of-work benefits has soared by 20 per cent since 2007, twice the rate of a worker on average earnings.

Labour insisted that 60 per cent of those affected by the real-terms welfare cuts, however, were in work – because working tax credits, child tax credits, local housing allowance, maternity allowance and statutory maternity pay will also be affected.The Chancellor said a new round of tax rises and spending cuts was necessary because the eurozone crisis had hit the economy and the recession was worse than previously thought – with almost seven per cent of national income lost in 2008 and 2009.Quoting the latest forecasts from the Office for Budget Responsibility, he said the economy was now expected to shrink by 0.1 per cent this year compared with a previous prediction of 0.8 per cent growth.

He admitted he was on course to miss his target that debt should start falling as a proportion of GDP by 2015/16 – the year of the next election. Instead he said it would take another year.Announcing the cut in corporation tax to 21 per cent, compared with 40 in the US, 33 in France and 29 in Germany, the Chancellor said: ‘This is the lowest rate of any major western economy. Britain is open for business.’Mr Balls said the Autumn Statement illustrated the ‘true scale of this Government’s economic failure’.

He added: ‘The Chancellor’s fiscal strategy has been completely derailed. The defined purpose of the Government, the cornerstone of the Coalition, the one test they set themselves – to balance the books and get the debt falling by 2015 – is now in tatters.’Labour would not say whether it intended to vote against legislation limiting benefit increases and  a move to cap overall benefit payments, saying it would study the detail. – Dailytimes