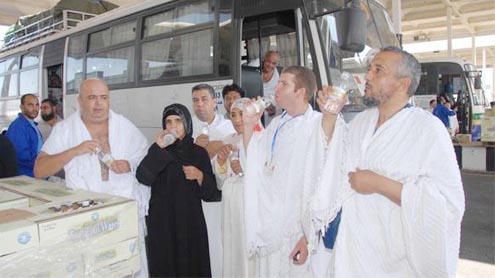 The project, which was implemented by the Ministry of Water and Electricity and overseen by the National Water Company, is one of the biggest projects for the provision and distribution of Zamzam water.The SR700 million project was established under the direction of Custodian of the Two Holy Mosques King Abdullah at his own expense.He has ordered the use of the latest global techniques and methods to obtain Zamzam water from the well.

The water is drawn through stainless steel pumps and pipes. It goes through a filtering and purifying process without affecting its purity and taste.The plant includes four production lines with a maximum production capacity of 200,000 cans a day. It contains a central warehouse that accommodates 1.5 million cans, in addition to another warehouse being built to accommodate 200,000 cans. Zamzam water has become more accessible through easy-to-carry containers with a capacity of 10 liters.

Some 42 points were set up for the distribution of the water automatically, in addition to another 16 points for its manual distribution to meet the demands of visitors and pilgrims at peak times and seasons.The project also pumps Zamzam water to the Two Holy Mosques. Last Ramadan more than 1,379,258 cubic meters was pumped to the Grand Mosque and 349,799 cubic meters to the Prophet’s Mosque.Meanwhile, preparations are under way to raise daily production capacity by 50 percent, whereas operational, maintenance, and purification, pumping, and distribution capacity have been raised by 120 percent. – ArabNews