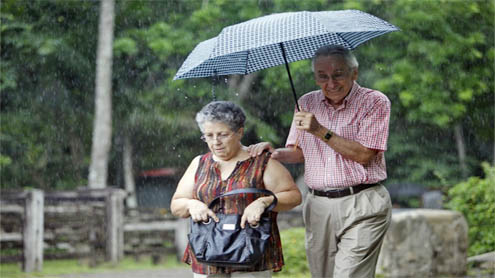 SAN JUAN, Puerto Rico:  Puerto Ricans are used to wet tropical weather, but the past few weeks have unleashed a series of storms of almost biblical proportions, destroying hundreds of homes, sweeping away cars and leaving tens of thousands without power.

It has been the wettest July ever recorded in the U.S. island territory, with 14 inches (36 centimeters) so far drenching the capital. More rain fell on July 18 than had ever come down in a 24-hour period.The rain rarely stopped that day, with 9 inches (23 centimeters) pelting the San Juan area. People fled homes and cars as water rushed through doors and then windows. Rising floodwaters stranded drivers on highways turned lagoons. Some commuters were forced to use kayaks and paddle boards.

“I’ve lived here 71 years, and this was the worst,” said Andres Colon as he tried to repair his flooded car in a working class San Juan neighborhood of Santurce. “It came fast and without warning.”The storm severely damaged some 500 homes and caused about $1.5 million in losses, according to initial estimates, said San Juan Mayor Carmen Yulin Cruz.The territory is just over two months into a seven-month rainy season, and it is already the second wettest start of the year for the region, even though no major tropical storm or hurricane has hit. Nearly 50 inches (127 centimeters) of rain have fallen so far, and more is likely on the way: Remnants of Tropical Storm Dorian were projected to slog through the Caribbean a bit north of the island by Monday or Tuesday.

The deluge follows hard on a string of other wet years. The rainiest year on record was 2010, when 89.5 inches (227.33 centimeters) fell. The island’s totals have been trending upward, in part because of warmer ocean temperatures and frequent occurrences of the weather phenomenon known as La Nina, which leads to a more active hurricane season, according to the National Weather Service.Nearby Cuba has been drenched as well. Authorities reported that June was the wettest on record for the western part of the island. In the first six days of that month alone, 16.6 inches (42.16 centimeters) of rain fell, 188 percent of the historic average for the full month, with isolated accumulations as high as 22 inches (55.88 centimeters).

Hundreds of homes were flooded along with croplands, highways and tobacco leaf-curing buildings in the western province of Pinar del Rio, known as the cradle of Cuba’s tobacco industry.In Puerto Rico, the wet weather has exposed an uncomfortable truth: The territory’s roads, bridges, tunnels and drainage systems are ill equipped for the increasingly heavy storms likely to come due to climate change.

“It’s an urgent issue, not only because of the problems we’ve had, but because of the problems we’re going to have,” said Gabriel Rodriguez, president of the nonprofit Puerto Rico Planning Society. “Those kind of extreme events are going to become more common, and the losses and problems associated with them will become greater.”Even normal years in Puerto Rico already are soggy by the standards of other famously rainy places. The island gets an average of 56 inches (142 centimeters) of rain a year, while Seattle gets an average of 39 inches (99 centimeters) and London sees about 29 inches (74 centimeters).

The territory’s problems are compounded by the lack of a general land-use plan. Rodriguez said that means hundreds of homes and businesses are built in flood-prone areas because projects are approved with little scrutiny.”It’s an accumulation of errors that we’re paying for with the problems we’re seeing now,” he said.And rising sea levels will hurt as well. Rodriguez noted that a dozen flights had to be rerouted when the mid-July storm flooded the main airport, which lies nearly at sea level.”Eventually, we’re going to be left without an airport,” he said.

Edgar Rodriguez, vice president of Puerto Rico’s Association of Engineers, said another problem is growing pressure on an aging drainage system that has not been properly maintained since it was built decades ago based on weather patterns that have since changed.”We’re building and building and building, and no one’s analyzing the impact of that construction,” he said.Rodriguez noted that the island is financially strapped. It’s struggling to emerge from a seven-year recession and is battling a $1.2 billion budget deficit and $69 billion in public debt. But he said the infrastructure could collapse without better planning and improved drainage systems.”We live on a tropical island in the Caribbean, and rain is something you can bet on,” he said. – YahooNews

Pope’s revolution; not all are pleased

1930s studio bosses dropped films at the requests of Nazis

1930s studio bosses dropped films at the requests of Nazis