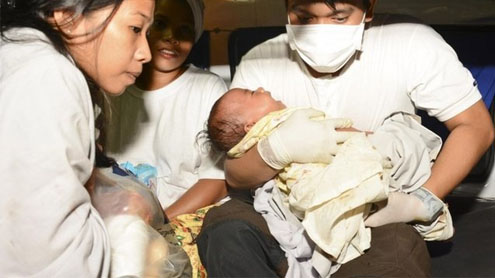 At least 26 people have died and more than 200 are missing after a ferry collided with a cargo ship and sank off the Philippines.

The MV Thomas Aquinas was in collision with the cargo vessel on Friday evening near the central city of Cebu, officials said.The ship was carrying 752 passengers and 118 crew, according to latest coast guard figures.The incident took place around 2km (1.2 miles) from the shore.The ferry was sailing into the port at Cebu – the country’s second biggest city – when it collided with the cargo ship travelling the other way at about 21:00 local time (13:00 GMT).

“The impact was very strong,” Rachel Capuno, a spokesperson for the owners of the ferry, told local radio.Survivors said hundreds of passengers jumped into the ocean as the ferry began taking on water and listing. The crew distributed life jackets.Many of the passengers were asleep and others struggled to find their way in the dark, reports said.One survivor, Jerwin Agudong, said he and other passengers jumped overboard in front of the cargo vessel.”It seems some people were not able to get out,” Mr Agudong told radio station DZBB. “I pity the children. We saw dead bodies on the side, and some being rescued.”

The ferry sank within 30 minutes of the collision, the AFP news agency reports. Rear Admiral Luis Tuason of the coast guard said navy divers recovered at least four more bodies from the wreck early on Saturday.”There could be more bodies there but there were ropes inside that our divers could get entangled in,” he said.The coast guard is to send more divers with deep-water equipment to help recover bodies, he added.Another coast guard official told reporters that the cargo ship, Sulpicio Express 7, had 36 crew members on board, but it did not sink.Passengers on the ferry had embarked at Nasipit in the southern province of Agusan del Sur.

The coastguard and some commercial vessels were able to pick up more than 600 survivors.The 11,000 tonne ferry was 40 years old, and operated by a Chinese-owned company called 2Go, reports the BBC’s South East Asia Correspondent Jonathan Head.The company became the largest ferry operator in the Philippines three years ago, following a merger of several smaller firms, our correspondent adds.Joy Villages, an official at the coastguard’s public affairs office headquarters in Manila, told AFP it was too early to determine the cause of Friday’s collision.

She said the Thomas Aquinas was a “roll-on, roll-off” ferry that allows vehicles to be driven aboard and is commonly used in the Philippines.Maritime accidents are common in the Philippine archipelago because of tropical weather, badly maintained passenger boats and weak enforcement of safety regulations.The world’s worst maritime disaster in peacetime occurred in the Philippines in December 1987. More than 4,000 people died when the Dona Paz ferry collided with a tanker. – BBC