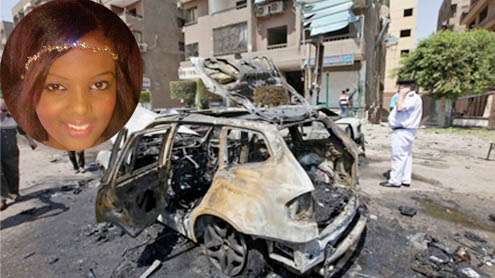 A British teenager lost her leg during an assassination attempt on a high-ranking Egyptian government official yesterday.

Deqa Hassan, 16, who grew up in Brixton, south London, was caught in the suspected suicide bomb blast in Cairo and has had her left leg amputated below the knee.Last night she described the attack, which police say was aimed at interior minister Mohamed Ibrahim.‘I was walking with my friend and at the end of the street we heard the sound of an explosion,’ she said from hospital.‘I just hit the floor. People were screaming everywhere. It was very scary.’

Deqa, who is of Somali origin, had returned to her parent’s home in Cairo from Dubai to attend school days earlier.Last month she wrote on her Twitter page she was afraid of returning to Egypt because of escalating violence. She said she now wants to return to Brixton. Deqa is among the more than 20 people reported to have been hurt in the blast. She and a child are among the most seriously injured.

She added: ‘The people nearby were yelling that they were injured and being shot at. Eventually two policemen walked up to us. We were screaming for help but they just walked away. It wasn’t human.’The minister was driving in a convoy near his ministry when the bomb exploded. Two alleged attackers were said to have been killed by security services.Eyewitnesses said they heard a man cry  ‘Allahu akbar’ after the explosion and a brief gun battle followed which left bullet holes down the side of the minister’s vehicle.

Two men alleged to be attackers were said to have been killed by the security services.Mr Ibrahim  – who has overseen a violent crackdown on supporters of ousted president Mohammed Morsi – condemned the bombing which injured more than 20 people.‘It was a heinous attempt. Even if I am martyred, another minister of interior will come and continue the war on the evil terror until we secure the country,’ he said.The attack is the first in the capital since the Muslim Brotherhood’s leader Morsi was deposed by the military in July.he group’s backers have warned of a possible violent response.

Deqa, who speaks with a London accent, said she now wanted to return to Brixton where she said she spent her childhood.‘The people nearby were yelling that they were injured and being shot at,’ she said.‘Eventually two policemen walked up to us. We were screaming for help but they just walked away. It wasn’t human,’ she added.Last night, a Foreign Office spokesman said: ‘We are aware of reports that a British national was injured in the bomb attack and we are urgently looking into it and liaising with the authorities.’ – DailyMail