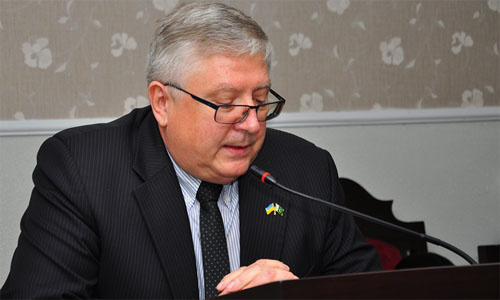 Ukraine’s ambassador to Pakistan, H.E. Volodymyr Lakomov, said on Wednesday that his country expected moral support from Pakistan while also terming the Russian ‘aggression’ as a challenge not just for Europe for the whole world.

Addressing a press conference in Islamabad, Mr Lakomov, speaking about the conflict in the Crimea region, said that the whole world would have to respond to Russia’s ‘aggression’ and alleged that Russia could not accept Ukraine as an independent state. The ambassador further claimed the recently held referendum in Crimea was not an accurate depiction of the situation as only 32 per cent of the population had participated in it.

He said in the given situation Ukraine expected Pakistan’s moral support and to use its influence on a global level rather than any military assistance. The diplomat said that Ukraine was ready to assist Pakistan reach its development goals. He said Pakistan could make use of Ukraine’s vast experience in the energy sector, and that Ukraine was exporting electricity to several European countries. -dawn

Monica Lewinsky opens up on affair with Clinton