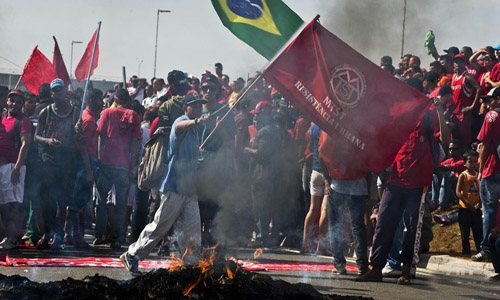 Brazil faced a test of its security preparations for the World Cup on Thursday as demonstrators aghast at the cost of the event joined protests and strikes in several major cities. Ongoing work stoppages by police and teachers and the threat of a nationwide strike by federal police also raised fears of chaos with just four weeks to go before the Cup kicks off.

A total of 10,000 people took to the streets in Belo Horizonte, Brasilia, Manaus, Porto Alegre, Rio and Sao Paulo, according to police. In business hub Sao Paulo, about 5,000 members of the Homeless Workers´ Movement (MTST) set fire to car tires and marched to the Corinthians Arena, which will host the opening match between Brazil and Croatia on June 12. Protesters also surrounded buses full of passengers and smashed the glass of vehicles at a car dealership that is an official FIFA sponsor. Police used teargas against the masked demonstrators, dispersing the march into small groups. At least 20 protesters were arrested in Sao Paulo, according to police.

Local media said at least two photographers suffered minor injuries. In both Rio and the capital Brasilia, police used pepper spray to disperse small groups as the major protests winded down. In the northeastern city of Recife, youths earlier took advantage of a partial strike by military police to loot stores and go on the rampage. A total of 170 people were arrested there over two days. After blocking off several streets, Sao Paulo protesters held a rally about 300 meters (yards) from the stadium as they slammed a “World Cup without the people. “Former president Luiz Inacio Lula da Silva, at the forefront of efforts to win the country´s hosting rights seven years ago, criticized the “virulent” protests. Many protesters vented their ire against world football body FIFA, viewed by many as only concerned with its own interests.

FIFA go home to Switzerland,” “total tax exemption for FIFA and (Cup) sponsors,” “Cup of disgrace” and “Hey, FIFA, pay my fare” read some of the banners. In Rio, one masked protester surrounded by hooded black bloc radicals ostensibly burned a World Cup stickers book while marchers bore banners reading “Money for the Cup — none for salaries. “Carlos Serrano, 32, told AFP: “I love soccer but beyond that there are other more important problems — the right to transport, health, education. “Pedro Amarildo, 50, agreed. “At first we thought it (the Cup) would benefit the people but it´s not turned out that way and that is why the people are unhappy,” he said in the capital Brasilia.

Back in Sao Paulo, MTST leader Guilherme Boulos threatened new protests during the World Cup if Brazil´s leaders do not address the demands of people such as the 1,500 families who have occupied a plot of land near the stadium. Calling for public money to be spent on affordable housing instead of on stadiums, the families have baptized their new slum the “People´s Cup.”  “The clock is ticking: they have 28 days to resolve not only the People´s Cup but all the occupations that are fighting this. If it´s not resolved, there will be problems,” Boulos told journalists. Brazil has spent more than $11 billion to organize the World Cup, money protesters say could have been better spent on areas such as transport, education, housing and health care.

The protests have shrunk in numbers since they embarrassed Brazil´s leaders last year by disrupting the Confederations Cup, a World Cup warmup tournament, but have also grown more radical. Sports Minister Aldo Rebelo said there was “no reason for any panic” and denied the protests and strikes had anything to do with the World Cup. Teachers, metalworkers and metro employees held separate protests in Sao Paulo. Demonstrators blocked some of the main roads around the city and caused traffic jams of up to 150 kilometers (90 miles), according to transport officials. Protest movements issued calls on social media for some 50 demonstrations in at least 10 of the 12 World Cup host cities. Adding to the concern was a move by federal police to consider a nationwide strike during the World Cup. Federal police officers oversee border security and immigration services and the strike threat comes with an estimated 600,000 foreign fans about to descend on the country. -thenews