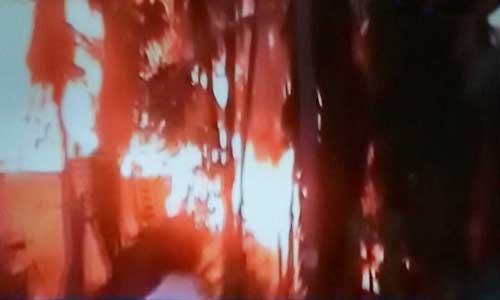 In a major blast in a gas pipeline 14 people were burned alive and 15 others received severe burns at Nagaram village of Mamidikuduru mandal of East Godavari district in Andhra Pradesh on Friday morning.

Villagers woke up to deafening noise and huge flames after the pipeline belonging to Gas Authority of India Limited (GAIL) suddenly caught fire near an ONGC connecting station. Villagers allege negligence on the part of officials as the pipeline developed rust and authorities failed to replace it. A pall of gloom descended on Mamidikuduru mandal with people running in panic and wailing for help as huge flames engulfed an entire village trapping about 30 people, and burning hundreds of tall coconut trees and reducing about 50 houses and shops to ashes.

Many birds and domestic animals were feared burnt in the mishap as flames rose to as high as 250 metres, villagers told media. The state government rushed in senior officials to the accident spot to take up immediate relief and rescue operations. Fire fighting personnel from half a dozen fire stations fought to tame the flames. Villagers recall the gas pipeline blowout in the district about two decades ago where flames continued to rage for several days. The injured have been rushed to hospitals in Amalapuram, Kakinada and Rajahmundry.

The government assured better medical treatment to the injured. AP chief minister N Chandrababu Naidu reviewed the situation with senior officials and express shock over the mishap. He also condoled the death of people. Leader of opposition YS Jaganmohan Reddy too expressed shock over the accident. Heavy property loss has been reported. The exact quantum of damage is however being assessed. -thenews

Children to Get Polio Drops in Khyber, Under Army Watch