The scariest is yet to come 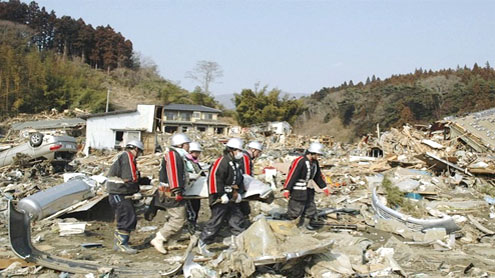 All of those broken bones in northern Japan, all of those broken lives and those broken homes prompt us to remember what in calmer times we are invariably minded to forget: the most stern and chilling of mantras, which holds, quite simply, that mankind inhabits this earth subject to geological consent — which can be withdrawn at any time.For hundreds, maybe for thousands of people, this consent was withdrawn with shocking suddenness — all geological events are sudden, and all are unexpected if not necessarily entirely unanticipated—at 2:46 on this past clear, cool spring Friday afternoon. At first, the shock was merely a much stronger and longer version of the temblors to which most Japanese are well accustomed. There came a stunned silence, as there always does. But then, the difference: a few minutes later a low rumble from the east, and in a horrifying replay of the Indian Ocean tragedy of just some six years before, the imagery of which is still hauntingly in all the world’s mind, the coastal waters off the northern Honshu vanished, sucked mysteriously out to sea.

The rumbling continued, people then began to spy a ragged white line on the horizon, and, with unimaginable ferocity, the line became visible as a wall of waves sweeping back inshore at immense speed and at great height. Just seconds later and these Pacific Ocean waters hit the Japanese seawalls, surmounted them with careless ease, and began to claw across the land beyond in what would become a dispassionate and detached orgy of utter destruction.We all now know, and have for 50 years, that geography is the ultimate reason behind the disaster. Japan is at the junction of a web of tectonic-plate boundaries that make it more peculiarly vulnerable to ground-shaking episodes than almost anywhere else — and it is a measure of Japanese engineering ingenuity, of social cohesion, of the ready acceptance of authority and the imposition of necessary discipline that allows so many to survive these all-too-frequent displays of tectonic power.

But geography is not the only factor in this particular and acutely dreadful event. Topography played an especially tragic role in the story, too — for it is an axiom known to all those who dwell by high-tsunami-risk coastlines that when the sea sucks back, you run: you run inland and, if at all possible, you run uphill. But in this corner of northeast Japan, with its wide plains of rice meadows and ideal factory sites and conveniently flat airport locations, there may well be a great deal of inland — but there is almost no uphill.Such mountains as exist are far away, blue and distant in the west. All here is coastal plain. And so the reality is this: if a monstrous wave is chasing you inland at the speed of a jetliner  it will catch you, it will drown you, and its forces will pulverise you out of all recognition as a thing of utter insignificance.

Even more worrisome than geography and topography, though, is geological history. For this event cannot be viewed in isolation. There was a horrifically destructive Pacific earthquake in New Zealand on Feb. 22, and an even more violent magnitude-8.8 event in Chile almost exactly a year before. All three phenomena involved more or less the same family of circum-Pacific fault lines and plate boundaries — and though there is still no hard scientific evidence to explain why, there is little doubt now that earthquakes do tend to occur in clusters: a significant event on one side of a major tectonic plate is often followed some weeks or months later by another on the plate’s far side. It is as though the earth becomes like a great brass bell, which when struck by an enormous hammer blow on one side sets to vibrating and ringing from all over. Now there have been catastrophic events at three corners of the Pacific Plate — one in the northwest, last Friday; one in the southwest, last month; one in the southeast, last year.

That leaves just one corner unaffected — the northeast. And the fault line in the northeast of the Pacific Plate is the San Andreas Fault, underpinning the city of San Francisco.All of which makes the geological community very apprehensive. All know that the San Andreas Fault is due to rupture one day — it last did so in 1906, and strains have built beneath it to a barely tolerable level. To rupture again, with unimaginable consequences for the millions who live above it, some triggering event has to occur. Now three events have occurred that might all be regarded as triggering events. There are in consequence a lot of thoughtful people in the American West who are very nervous indeed — wondering, as they often must do, whether the consent that permits them to inhabit so pleasant a place might be about to be withdrawn, sooner than they have supposed – Khaleejtimes

I didn’t authorise anyone to purchase votes: PM Manmohan

In Hisar, eunuchs teach a lesson in gender equality

In Hisar, eunuchs teach a lesson in gender equality