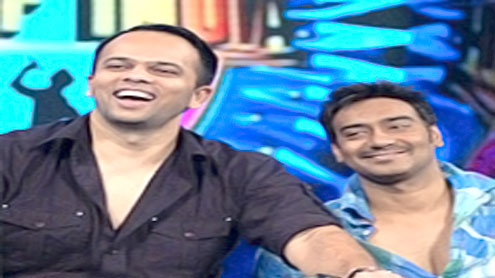 Rohit Shetty is rushing through the Singham remake starring Ajay Devgn. Sources reveal that this hurry is to move on to his next two projects — Bol Bachchan with Abhishek Bachchan and an untitled flick with Shah Rukh Khan. And this has irked Devgn.The director and actor recently had a difference of opinion about the way the remake is being shot. A source informs, “Ajay feels that Rohit is in a tearing hurry to finish the film.

Even though they have a comfortable work equation and are friends, this is their first big confrontation over a project.”Both work differently on projects. “Rohit is very hands-on with his films. He likes going about work at a speed he’s comfortable with. Ajay is laidback and relaxed and likes to take time with his scenes. AJ feels his buddy is only rushing through Singham so he can move on to his other films, ” adds the source.Shetty has also been spending time working on his SRK script and fine-tuning it. He’s super excited to work with King Khan and is keen to get the project underway. This has caused some tension between AJ and the director.A source close to Rohit maintains, “There is no altercation between the two. Ajay is more than happy with Rohit. They are childhood friends, and there’s no scope for such misunderstanding.Also Ajay is co-producing Bol Bachchan, so he would be more than happy letting his director finish the film fast. He has also given Rohit his best wishes for the SRK film. There’s no bad blood between the two – Santabanta

I didn’t authorise anyone to purchase votes: PM Manmohan

I didn't authorise anyone to purchase votes: PM Manmohan