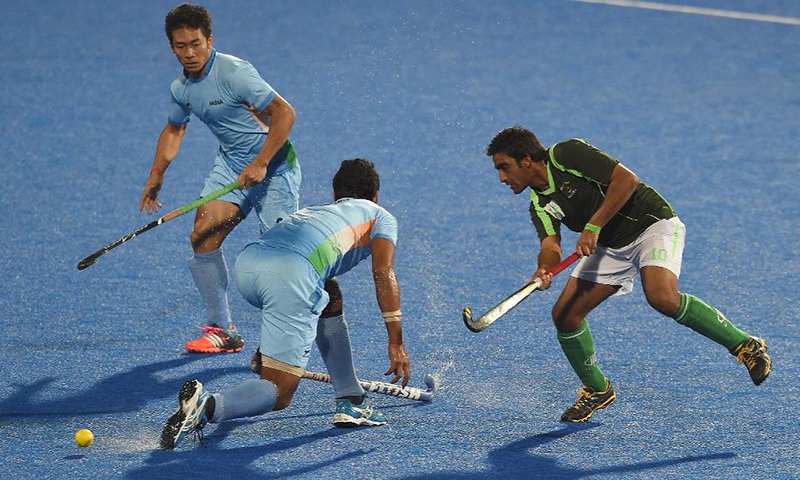 Sub-continental rivals India and Pakistan have had a taste of field hockey’s new four-quarter format and will be aiming to capitalise on that experience as they take on the best in the Champions Trophy which gets underway on Saturday. India defeated Pakistan for the Asian Games gold in October, under the new format of four 15-minute quarters instead of the previous format of two 35-minute halves. The experience should be beneficial but is unlikely to be enough to arrest India and Pakistan’s decline in a sport they dominated in the past, having been superseded by the likes of Australia, Germany and the Netherlands which play at greater pace. Many international players also have the benefit of Indian conditions and playing at the Kalinga Stadium, having competed in India’s professional franchise-based league.

“Some of our players have played at this ground during the Hero Hockey Indian League, which will help us to understand the ground better,” Australian captain Eddie Ockenden said ahead of the tournament.

“The 2012 Champions Trophy in Australia was a great tournament for us and we want to repeat the same success here in Bhubaneswar.” Australia, which lost a recent home series to India 3-1, is looking for a sixth consecutive title and 14th overall. “We’ve been experimenting with our sides and have some promising players. But India is a much improved team. When we played against them last month, they were really good and so they are the team we are looking at closely,” Ockenden said. At the Asian Games, Pakistan may have lost the final against India but did have the satisfaction of beating its neighbor in the group stage. “We have got a good team that beat India in the league at Incheon,” said Sheikh about the Mohammad Imran-led team, which failed to qualify for this year’s World Cup in the Netherlands and did not field a team at the Commonwealth Games in Glasgow due to a split in its national Olympic association.

The Pakistan team also failed to send its team abroad for smaller tournaments owing to a cash crunch and has been able to make this trip only because of a late-arriving sponsorship, but Sheikh says the team has hope since it finished third at the last Champions Trophy beating India 3-2 at Melbourne. Though Indian hopes are high, a 4-0 defeat to Australia in the Glasgow Commonwealth Games final and the fact that they have just recently lost the services of coach Terry Walsh, counts against the hosts.

The tournament is being played on a league basis with all eight assured of quarterfinal berths. “Our aim will be to win every match we play and the most important thing is to keep improving our game during the tournament,” Belgium coach Jeroen Delmee said. “I’m happy with my team but this will be a big test for us and no team can take other teams for granted.” India is in Pool B along with the Netherlands, Germany and Argentina while Pakistan’s Pool A rivals are Australia, Belgium and England.