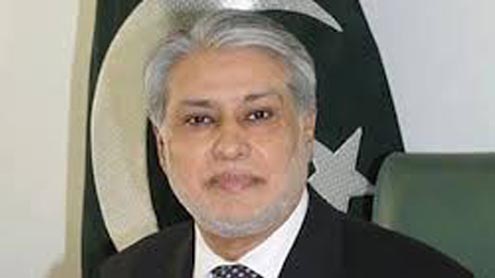 Pakistan is poised to see robust surge in foreign investment following a series of economic reforms and measures that have boosted confidence of international institutions and entrepreneurs, Finance Minister Ishaq Dar said.

Senator Dar, whose hectic schedule at the annual IMF-World Bank gatherings, includes around 50 meetings with experts, business leaders, bankers and chiefs of international financial institutions, expects investment in in oil and gas exploration and construction of power projects. “We aim to increase investment from the current 14 percent to 20 percent of GDP in three years,” he said Saturday as he emerged from meetings at the World Bank. For example, the Government of Pakistan has given the World Bank the go ahead for work on Dasu hydro power project, the first phase of which would cost around $ four billion with electricity generating capacity of 2200 MW.

Dar expects the World Bank to invest $ 1.6 billion in Pakistan through International Development Assistance 16. The finance minister explained in an interview that the International Finance Corporation, which currently has $ 900 million investment in Pakistan, is ready to increase it to $ three billion through private sector. Similarly, the Overseas Private Investment Corporation, which at the moment has invested around $ 450 million, is willing to invest another $ one billion. Dar said Prime Minister Muhammad Nawaz Sharif, during his upcoming visit to Washington, would interact with business leaders, who now see Pakistan as a much better business destination than previously.

The new investments and ventures will stimulate the economy and spur the GDP growth which hovered around three in the last five years — the expansion in economic activity would generate new jobs and enable the government to go for speedy completion of development and infrastructure and energy projects,” he said. On fixing the fiscal deficit, the finance minister Dar said he plans to halve it to 4 percent from the current 8.2 percent over the next three years. “We are going to increase revenues with 28 percent growth in tax collection— already in first quarter we have registered a 20 percent growth compared with just 2 per cent last year — remittances have increased by nine percent and now we expect $ 15 billion in the fiscal year—-  large scale manufacturing has recorded a four per cent increase —- all these positive indicators have come up in  just first few months of the new government. We will endeavor to achieve sustained growth in the months and years ahead.”_ App

Jinnah and Gandhi and the Indian Constitution — Syed Sharifuddin Pirzada