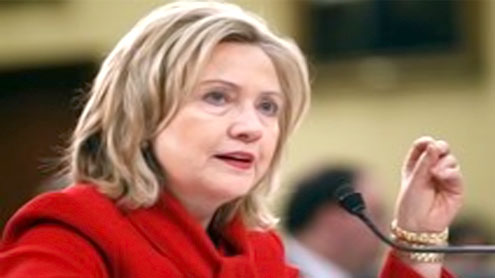 HAVANA: U.S. Secretary of State Hillary Rodham Clinton issued a strongly worded call Thursday for Cuba to free an American contractor who is awaiting a verdict on charges that he sought to undermine the island’s communist government by bringing communications equipment into the country.”We deplore the injustice toward Alan Gross,” Clinton said in congressional testimony in Washington. “We want him home.”A panel of five Cuban judges has been deliberating Gross’ fate since his two-day trial wrapped up Saturday. It is not clear when they will issue a verdict. Gross faces up to 20 years in prison if convicted.The 61-year-old Maryland native was in Cuba on a USAID-backed program that seeks to build democracy on the island when he was arrested in December 2009. His family and U.S. officials say he was trying to help the island’s Jewish community improve Internet access.Cuba says programs like the one Gross was a part of aim to bring down the government.

The case has sunk already poor relations between Washington and Havana to a new low. U.S. officials, including Clinton, have made clear a rapprochement between the Cold War enemies will be impossible while Gross remains jailed.Clinton’s comment on injustice was sure to rankle Havana. Cuba’s government insists its courts are independent, and Cuban officials say Washington has all but conceded Gross was a government contractor who entered the island on a tourist visa in an effort to illegally distribute communications equipment.The Cuban government has said Gross accepted some responsibility for his actions at the trial, but also blamed his employer, Development Alternatives Inc., for putting him in danger.Gross’ family and U.S. officials have remained largely silent since the trial ended.But Peter Brennan, the State Department’s top official on Cuba, did brief 15 congressional staffers on the Havana trial, which was attended by U.S. consular officials, a congressional aide who was in on the call told The Associated Press.

Brennan told the staffers that two members of Cuba’s Jewish community gave testimony at the trial, which Brennan characterized as “neutral.” There had been speculation Jewish leaders on the island would testify against Gross, since several said publicly that they had nothing to do with him.Should Gross be convicted, efforts will immediately turn to getting him released through a pardon, possibly on humanitarian grounds. His wife, and U.S. officials, say Gross has lost more than 90 pounds since his arrest and note that his 26-year-old daughter and 88-year-old mother are both suffering from cancer.Several Cuba experts have said Havana wanted to use Gross’ case to shine a light on the U.S. government’s $20 million democracy-building programs, which Cuban officials have long insisted seek nothing less than the overthrow of the island’s government.Since the trial wrapped up, Cuban television has aired a television program detailing the history of such programs, with officials saying they showed Washington was waging a cyberwar. Cuban media have promised to air a second installment in the coming days, possibly including footage of testimony from the trial – Yahoonews