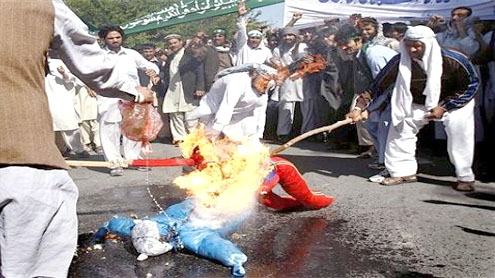 The top U.S. commander and NATO’s civilian representative in Afghanistan have condemned the burning of a Quran by a radical pastor in the United States.  Afghans have taken to the streets to protest against the incident, and violent demonstrations have left at least 22 people dead, including several foreigners working for the United Nations.The burning of the Muslim holy book by members of a small Florida church has outraged people across Afghanistan. Angry Afghans took to the streets for the third straight day on Sunday to protest the incident.  Authorities say that clashes between police and stone-throwing protesters left at least two more people dead. The latest demonstrations took place in the eastern city of Jalalabad, and the southern city of Kandahar.

Speaking to reporters on Sunday in Kabul,  the commander of U.S.-led international forces, General David Petraeus condemned the  Quran burning and offered condolences to the families of all those injured and killed in the protests. “We condemn the action of individual in the United States who burned a Holy Quran. That action was hateful, it was intolerant and it was extremely disrespectful. We condemn it in the strongest manner possible,” he said.General Petraeus says that in the wake of ongoing protests international forces are working closely with Afghan partners to try to bring the situation under control. He says the issue also came under discussions with President Hamid Karzai at Sunday’s meeting of the Afghan National Security Council.”Needless to say all leaders are calling on all elements here in Afghanistan to demonstrate calm and to demonstrate the opposite of what the individual in the United States demonstrated, to demonstrate tolerance, to demonstrate respect and that is what we have sought to do and that is what I believe our Afghan partners have indeed also have sought to do,” he said.

The top NATO civilian representative in Afghanistan, Mark Sedwill also reiterated that the burning of the Quran was an act of disrespect to the Muslim faith, saying the act does not in any way represent the views of the nations and their citizens in the international alliance.Muslim clerics leading the demonstrations in Afghanistan are urging President Karzai to demand that Pastor Terry Jones of the small church in Florida faces justice for burning a copy of the Quran.The violent protests began on Friday when angry Afghans stormed a United Nations office in the northern city, Mazar-e-Sharif, leaving five protesters and seven foreign U.N employees dead.The killings prompted international condemnation while the radical U.S. pastor has denied any responsibility for the violence.The burning of a Quran took place on March 20 and initially received little press attention in Afghanistan . But a strongly-worded statement by Afghan President Karzai condemning the act and subsequent sermons at mosques across Afghanistan apparently brought the issue to the attention of many Afghans. – Voanews