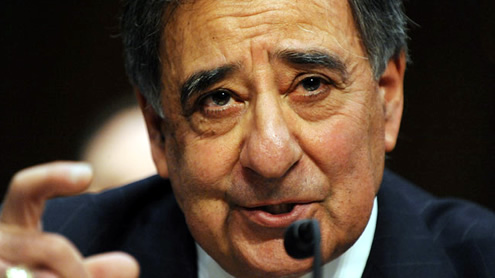 Defense Secretary Leon Panetta warns that excessive partisanship could well “hollow out” the military, saying “we cannot tolerate” if Congress fails to reach an accord on debt reduction and thereby triggers hundreds of billions of dollars in across-the-board cuts. Speaking with CNN’s Erin Burnett in an interview that aired Monday on the first edition of her program “OutFront,” Panetta said that he was prepared to slash about $450 billion from the defense budget over the next decade, as currently mandated. But he described as potentially dangerous any deeper cuts, like the $1.2 trillion that would be unavoidable if a bipartisan panel does not reach a debt-reduction accord in the coming weeks that is then passed by Congress and signed by President Barack Obama.

“If the Congress is irresponsible enough to suddenly turn on this sequester idea (leading to massive, automatic cuts to defense) because they failed to meet their responsibility, that would clearly damage our national defense,” Panetta said. “(Cutting) in some kind of blind fashion that basically hits everything … is going to result in hollowing out the force. We cannot tolerate that. We still risk too many threats out there to weaken our defense.” The former CIA director, presidential chief of staff and U.S. congressman didn’t appear optimistic that Congress will rise to the challenge, describing the “inability to confront the challenges that are out there,” divisions between political leaders and partisanship as the worst in his 40 years in Washington.

Panetta added that there is merit to many Americans’ view that “Washington is dysfunctional and not able to respond to these challenges,” like the debt issue. “I really do think that both sides have to understand how concerned not only Americans are, but the rest of the world is, about our ability to solve the problems that face us,” he said. The secretary spoke shortly before embarking on a trip to the Middle East and, eventually, to Belgium for a NATO meeting. On Monday, he was in Israel and visited the Palestinian territory of the West Bank. His next stop will be in Egypt. In his wide-ranging interview, Panetta addressed several issues and threats. Chief among them was Iran, which he accused of sending “pretty sophisticated weaponry to go after Americans” in Iraq, working to “undermine governments in the Middle East” and trying to “foster (and) supply terrorism.”

“That’s not what the United States does,” he said. “What we hope to do is work with the countries in that region so that they can have the capability to defend themselves against that kind of terrorism.” The defense chief also addressed America’s “complicated relationship with Pakistan,” acknowledging that nation’s battle with terrorism and calling it imperative to build a “cooperative relationship.” He also pointed to — as other top U.S. officials have in the past — some Pakistani officials’ relationship with members of the Haqqani network, which he claims goes into Afghanistan to attack U.S. troops then returns to its “safe haven” in Pakistan. “They understand the threat of terrorism, but they also can’t pick and choose among terrorists,” Panetta said of Pakistani officials. “That is where we have some differences.”

Panetta addressed the growth — and reported growing militarization — of China, insisting his goal is to have a “transparent” relationship so that “we understand each other.” That said, he noted concerns if China further develops weaponry and expands its military presence. “For that reason, we always have to have a forward presence in the Pacific that makes very clear that we have to protect the international community … and their ability to protect their own interests,” he said. – CNN