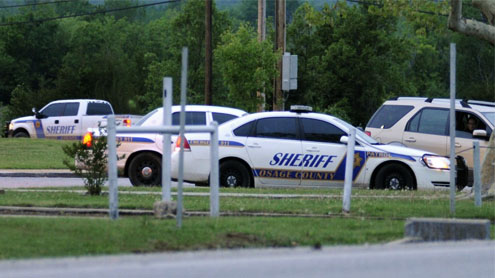 Police in Oklahoma have arrested two white men after three people, all black, were shot dead on Friday.

Two other black victims are in a critical condition in hospital following the shootings in Tulsa.The suspects have been named by police as Jake England, 19, and Alvin Watts, 32.They are expected to face three counts of first-degree murder and two of shooting with intent to kill.The men were arrested at a home in Tulsa at 01:47 local time (06:47 GMT) on Sunday following an anonymous tip-off. They have been taken to a police station in the city for questioning.A helicopter was used in the operation to detain the suspects.

None of the victims are thought to have known each other and all five of them were out walking when they were shot within a 3 mile (4.8 km) radius of one another early on Friday.The north Tulsa area, where the shootings took place, is a predominantly black area, although police have yet to establish a motive.

Tulsa police spokesman Jason Willingham said: “We don’t have a motive at this time.”We are still asking questions and hopefully that will become clear in the coming days.”Mr Willingham could not confirm whether the suspects were armed when they were taken into custody.However, of the investigation into the killings, he said: “We are going to turn over every rock.”Tulsa Police Chief Chuck Jordan had earlier said officers would do whatever it took to apprehend those responsible for what he described as “vicious and cowardly attacks”. – BBC