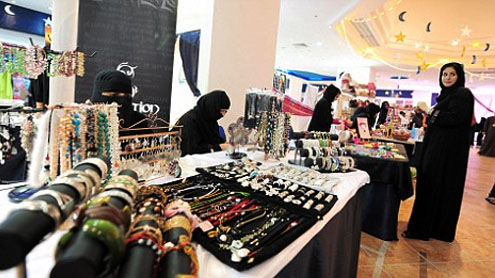 Assistant Secretary of the Ministry of Labor for development Fahd Al-Tikhaifi said the ratio of employment of Saudi women in this sector would be very large. He did not speculate on the number of Saudi women to be employed but said a medium-size shop could employ between two and five Saudi women.”The decision was made last year. The shops had enough time to prepare themselves for employing saleswomen,” he said.

Al-Tikhaifi expected the execution of the decision would see some difficulties in the initial days, as the perfume shops also sell fragrance for men. “While cosmetics are only for women, perfumes could be for both men and women,” he noted.Al-Tikhaifi denied the decision would have any influence on the rate of Saudization or that it would reduce the openings available for young men. He said the retail sector has enough job opportunities for young men and women.

“The decision is mainly designed for Saudi women. It has nothing to do with Saudi men or foreign women,” he said.Chairperson of the trade committee at the Jeddah Chamber of Commerce and Industry Nashwa Tahir welcomed the decision and said it would create thousands of jobs for Saudi women. “The decision would not reduce the job opportunities for Saudi men, as all the manpower in the cosmetics and perfume shops were foreigners,” she noted.

Muhammad Al-Ghamdi, in charge of employment in a chain of famous cosmetics and perfume shops, expected the decision to increase sales. “Women understand each other, and a saleswoman will know better what a woman customer may be looking for,” he said. – Arabnews