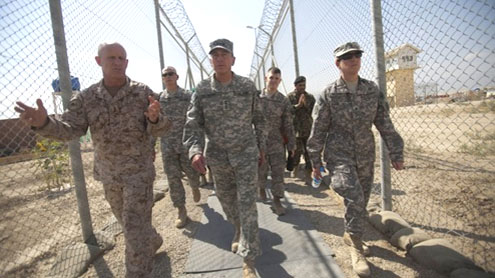 KABUL: The United States has for several years been secretly releasing high-level detainees from a military prison in Afghanistan as part of negotiations with insurgent groups, a bold effort to quell violence but one that U.S. officials acknowledge poses substantial risks.

As the United States has unsuccessfully pursued a peace deal with the Taliban, the “strategic release” program has quietly served as a live diplomatic channel, allowing American officials to use prisoners as bargaining chips in restive provinces where military power has reached its limits.But the releases are an inherent gamble: The freed detainees are often notorious fighters who would not be released under the traditional legal system for military prisoners in Afghanistan. They must promise to give up violence — and U.S. officials warn them that if they are caught attacking American troops, they will be detained once again.

There are no absolute guarantees, however, and officials would not say whether those who have been released under the program have later returned to attack U.S. and Afghan forces once again.“Everyone agrees they are guilty of what they have done and should remain in detention. Everyone agrees that these are bad guys. But the benefits outweigh the risks,” said one U.S. official who, like others, discussed the issue on the condition of anonymity because of the sensitivity of the program.

The releases have come amid broader efforts to end the decade-long war through negotiation, which is a central feature of the Obama administration’s strategy for leaving Afghanistan. Those efforts, however, have yielded little to no progress in recent years. In part, they have been stymied by the unwillingness of the United States to release five prisoners from Guantanamo Bay — a gesture that insurgent leaders have said they see as a precondition for peace talks.

Unlike at Guantanamo, releasing prisoners from the Parwan detention center, the only American military prison in Afghanistan, does not require congressional approval and can be done clandestinely. And although official negotiations with top insurgent leaders are seen by many as an endgame for the war, which has claimed nearly 2,000 U.S. lives, the strategic release program has a less ambitious goal: to quell violence in concentrated areas where NATO is unable to ensure security, particularly as troops continue to withdraw. The releases are intended to produce tactical gains but are not considered part of a grand bargain with the Taliban.

U.S. officials would not say how many detainees have been released under the program, though they said such cases are relatively rare. The program has existed for several years, but officials would not confirm exactly when it was established.The process begins with conversations between U.S. military officials and insurgent commanders or local elders, who promise that violence will decrease in their district — or that militants will cease fighting altogether — if certain insurgents are released from Parwan. The value of the tradeoff and the sincerity of the guarantee are then weighed by senior military officials in Kabul, officials said. – WP