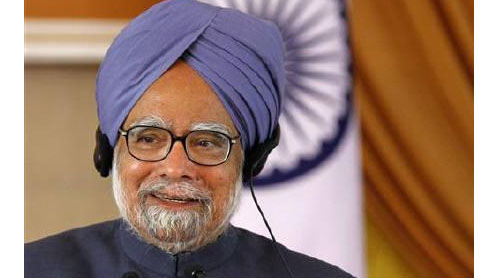 Investors are hoping PM Manmohan Singh, who unleashed radical reforms that turned around India’s economy two decades ago, can work some similar magic after assuming the finance portfolio again.

On Friday investors drove the benchmark Sensex share index to a two-month high, spurred by hopes that the 79-year-old Singh can put the mojo back into the once-booming economy, which is growing at its slowest pace in nine years.“He’s got the economy’s pulse. There’s a lot of hope building that he will take some right steps,” Amisha Vora, joint managing director of one of India’s leading brokerage houses, Prabhudas Lilladher, told AFP.A survey of India’s top 150 chief executives by business group Assocham found expectations of “renewed energy being infused” into the economy since the ex-World Bank economist took control of the finance ministry last week.

Singh, who replaced veteran politician Pranab Mukherjee after he stepped down to run for India’s mainly ceremonial presidency, has already spoken of the need to revive the economy’s “animal spirit”.“We need to work to get the economy going again and restart the India growth story,” Singh told senior finance ministry officials, calling for a reversal of “the climate of pessimism”.As finance minister in 1991, Singh ignited the fuse for rapid growth as India teetered on bankruptcy, by embracing free markets and cutting through suffocating red tape.

Many had hoped that as prime minister he would execute a “second-generation” of changes to propel growth into double-digits and allow hundreds of millions of Indians to escape poverty faster.But his Congress Party-led coalition has dismayed investors by being unable to push through planned reforms due to opposition from within and a string of multi-billion-dollar corruption scandals.While Singh’s rallying cry last week improved business sentiment, analysts say he must now find the deeds to match his words.

“He will have to walk the talk and there will have to be a political sign-off from coalition allies on his actions,” CLSA economist Rajeev Malik told AFP.The prime minister has already signalled India may back away from moves that have rattled foreign investors, including efforts to aggressively tax past financial transactions involving firms like British phone giant Vodafone.“If Singh reversed even the Vodafone decision, that would restore tremendous foreign investor confidence in India,” Deepak Lalwani, head of London-based investment consultancy Lalcap, told AFP.

Analysts say Singh could stay at the helm of the finance ministry until the government’s mandate ends in 2014 to put the economy back on track.Global ratings agencies have warned they may downgrade India’s debt to junk status with the economy reeling from gaping fiscal and current account deficits and stubbornly strong inflation.The economy grew by 5.3 percent between January and March as industrial growth slowed to a crawl. The rupee has lost more than a quarter of its value against the US dollar over the last 12 months to hit record lows.

Among the initiatives analysts are hoping for is revival of plans to allow foreign supermarkets, such as US giant Walmart, to own 51 percent of Indian operations that could bring billions of dollars in investments.On Sunday, Indian media reported the government may also raise the foreign investment limit in the lucrative insurance sector to 49 percent from the current 26 percent to draw outside capital and support the rupee.Other anticipated measures include simplification of land acquisition for industrial projects and permitting foreign airlines to buy up to 49 percent of domestic airlines, which could help the cash-strapped aviation sector.

Analysts say Singh, who is not expected to continue as premier after the elections, is keen to protect his legacy as father of India’s economic reform.His personal reputation has taken a beating during the government’s second term, with critics describing him as the dithering captain of a rudderless administration.“This is a golden chance for him to erase the damaging things that have been said about him — that he has been a very weak leader,” said analyst Vora.“He would not like to retire with the reputation of the man who brought all those economic reforms (in 1991) but who then ended his career by screwing up the economy.” – Khaleejnews