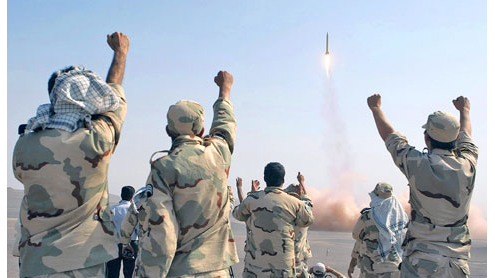 Iran and the United States on Tuesday underlined their military readiness for conflict should faltering diplomacy over Tehran’s atomic activities fail, as tensions rose over tougher Western sanctions.

Iran said it successfully fired several dozen missiles — including a medium-range Shahab-3 ballistic weapon with a range capable of striking Israel — in war games in its central desert region designed to show its capacity for counter-attack.  US officials, meanwhile, detailed a quiet US military build-up in the Gulf region that includes the deployment of warships.  The belligerent posturing came on the day technical experts from Iran and from world powers, including the United States, were due to meet in Istanbul in the latest round of talks.  The negotiations have been downgraded from a senior political level after three previous rounds this year failed to bridge vast differences held by each side.

Iran refuses to bow to Western demands that it curb its sensitive uranium enrichment under the pressure of punishing economic sanctions that were ramped up last week to their most severe level so far.  “The sanctions imposed against our country are the harshest and strongest ever imposed. If the enemies think they can weaken Iran with these sanctions, they are wrong,” Iranian President Mahmoud Ahmadinejad was quoted as saying by the official Irna news agency.  Tehran is demanding its “right” to enrichment be recognised and the “hostile” sanctions be eased for the talks to progress. It rejects Western suspicions that it is seeking a nuclear weapons “break-out” capability.  Israel, which is not party to the talks, has warned it could launch pre-emptive air strikes on Iran’s nuclear facilities to hinder what it sees as a threat by Iran to its existence.  US President Barack Obama has also repeatedly said that “all options” — including that of US military action — are on the table regarding Iran.-Khaleejtimes