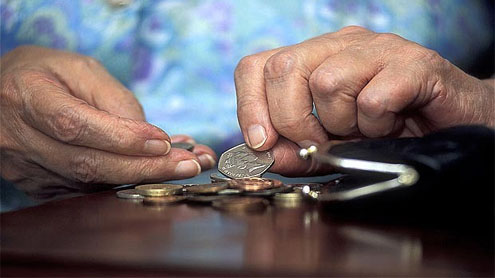 Steve Webb, the pensions minister, said he wanted to give people “certainty” that they would get a guaranteed income when they retired.

Millions of savers have seen the value of their workplace pensions fall because of stock market turmoil and the Bank of England’s policy of printing money to stimulate the economy.Ministers fear that unless they can guarantee that pensioners’ money is safe, they will be deterred from saving. The average Briton saves almost £300 a month in a workplace pension, comprising both personal and employer contributions as well as tax relief from the Government.

Experts propose that workers pay a levy on contributions of 0.75 per cent, about £30 a year on average.The policy, provided by private insurance companies, would guarantee savers that their pension pot on retirement is worth at least the combined value of their contributions, their employers’ contributions and the tax relief they have received over their working lives. The policy could be the difference between a person having enough money to retire comfortably and facing poverty in old age. Mr Webb will today meet members of the pension, insurance and investment management industries.

A consultation paper on how to best provide guarantees to savers is expected later this year. Mr Webb said: “People really don’t want to work for a year and get a pension statement showing their savings have gone down not up.”The Government hopes to restore confidence in pensions this autumn, when more than 10 million people will be automatically enrolled in workplace pensions.Mr Webb added: “As part of the options we offer people, we want greater certainty and guarantees or insurance to be on that list. Auto-enrolment is our best chance of getting people into saving and if they are put off by fear of risk, volatility and uncertainty, it is very hard to get them back again.

“Some form of guarantee has an important part to play in the success of auto-enrolment.”A third of Britons over 50 have no private retirement savings and experts have warned that the country is “sleepwalking into a pensions crisis”.The Organisation for Economic Co-operation and Development said last month that British savers had suffered bigger losses from their workplace pensions in the past decade than savers in virtually every other nation in the developed world.Recent stock market turmoil has meant that people with private pensions retiring today will be as much as 30 per cent worse off compared with those who finished work in 2008 with similar savings.

Since the summer of 2007, when the credit crisis started, the FTSE 100 has fallen by about 15 per cent. This fall in share prices has reduced the value of a £100,000 pension pot to £85,000. The inflationary effect of the Bank of England’s policy of printing money — referred to as Quantitative Easing — has also reduced the value of pensions.Mr Webb said: “I don’t believe there is a one size fits all approach. This is about challenging the industry to come up with innovative products that offer people more certainty.” Joanne Segars, chief executive of the of Pension Funds, said confidence in pensions had “never been lower”.

“Any fresh thinking that encourages saving is welcome,” she said. “People are understandably wary that their savings will be eaten away, so there may be appetite for pensions that carry a guarantee.”The insurance would be paid for with automatic deductions from savings.Another option would be to charge a percentage on the overall pension pot, rather than the monthly costs.However, experts say this would cost tens of thousands of pounds over a person’s working life. Pensions companies, insurance groups and regulators have formed a group to examine the plans.

Scott Eason, an executive at the Institute and Faculties of Actuaries and a member of the working party, said the saver bore financial risk attached to a defined contribution (DC) pension scheme. This contrasts with gold-plated final salary schemes, where the risk is borne by the employer.Mr Eason said: “With defined benefit schemes the individual has responsibility for the investment strategy and if they get that wrong, or we have market crashes, then ultimately the whole of that risk falls back on the individual. There is no underlying guarantee from anybody that the pot is going to be sufficient to give you enough in retirement.”

Mr Eason said returns from defined contribution schemes had been poor over the past five years, leading people to think they would have been better off under other schemes.In this year’s Budget, George Osborne announced that from 2028 the state retirement age would be linked to life expectancy as people lived longer. – Thetelegraph