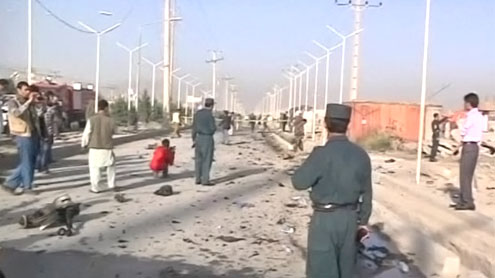 Up to 12 people are reported to have been killed in a suicide bomb attack on a minibus carrying foreigners near the Afghan capital, Kabul.

Eight South Africans were killed in the attack which took place on a major road leading to the international airport.Afghan insurgent group Hezb-e-Islami has claimed responsibility for the blast, which it says was in response to a recent anti-Islam video.It comes as Nato says it will restrict operations with Afghan forces from now.A South African foreign affairs ministry spokesman told the AFP news agency the eight victims worked for a private aviation company.

“We have identified those who have been killed, but we cannot release their names until we have notified their next of kin,” Nelson Kgwete, a spokesman for South Africa’s Department of International Relations and Co-operation told the BBC.”This is the first time that we’ve had South Africans killed in such a manner in the region.”Mr Kgwete said it was hard to tell whether more South Africans were in the area. He did not comment on whether there were plans to extract them until the situation normalised.He said South Africa had no diplomatic relation with Afghanistan which made it difficult to get all necessary information quickly.

South Africa was working through its representatives in Pakistan on the matter, Mr Kgwete said.The BBC’s Bilal Sarwary in Kabul says three Afghans, including a passer-by and a mechanic, were also killed in the blast.The joint command of the International Security Assistance Force (Isaf) in Afghanistan cited a recent rise in insider attacks on Nato forces and events related to anger over the Innocence of Muslims film as the reasons behind the decision.Fifty-one Nato troops have been killed by Afghan soldiers so far this year – 15 in August alone.

Hezb-e-Islami also said the film – an amateur video produced in the US which insults the Prophet Muhammad – was the motivation for Tuesday’s attack.That would make it the deadliest response to the film so far.The attack happened in the early hours of this morning.A witness told the Associated Press news agency he was waiting for a bus to go to work at 06:45 (03:15 GMT) when he saw a small white sedan ram into the minibus.”The explosion was so powerful and loud that I could not hear anything for 10 minutes,” said Abdullah Shah, a teacher.

Had the blast been later in the morning, he said, with more traffic on the roads, the death toll would likely have been higher.The force of the blast hurled the bus some 50 metres, AP reported.Reporters on the scene of the powerful suicide blast counted six bodies, but officials say up to 12 people have died, most of them foreigners.The vehicle was believed to be transporting international staff working at the airport.

A senior counter-terrorism official in Kabul told the BBC: ”We can confirm that the suicide attack was carried out by a female suicide attacker. She is either a young girl or a woman.”It is rare for women to carry out suicide attacks in Afghanistan. Some reports say this is the first suicide car bombing by a woman in Afghanistan, where only a very small minority of women know how to drive.

The attack came a day after hundreds of protesters threw rocks and torched police vehicles in an angry protest against the anti-Islam film in Kabul.Nato is preparing to withdraw most combat forces from Afghanistan by the end of 2014, handing over security to the Afghan national forces.The restriction of joint operations will be a major step back to this process, as Nato operations rely on close contact with Afghan security forces, correspondents say. – BBC

Selena Gomez shows off her bikini