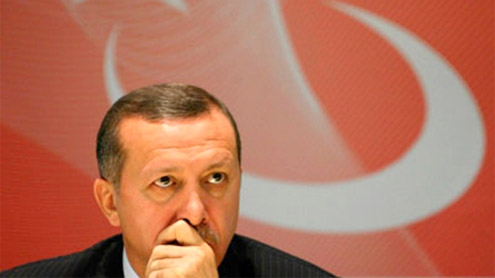 Prime Minister Tayyip Erdogan trumpeted Turkey’s credentials as a rising democratic power on Sunday, saying his Islamist-rooted ruling party had become an example to the Muslim world after a decade in charge.

Addressing thousands of party members and regional leaders at a congress of his Justice and Development (AK) Party, Erdogan said the era of military coups in the nation of 75 million people was over.He vowed to forge a more diverse constitution and turn a new page in relations with Turkey’s 15 million Kurds, in a speech lasting almost two and half hours and meant to chart the AK Party’s agenda for the next decade.

“We called ourselves conservative democrats. We focused our change on basic rights and freedom,” Erdogan told thousands of cheering party members at the congress in a sports stadium in the capital Ankara.”This stance has gone beyond our country’s borders and has become an example for all Muslim countries.”

Per capita income has nearly tripled in that time and Turkey has re-established itself as a regional power, with its allies seeing its mix of democratic stability and Islamic culture as a potential role model in a volatile region.”Turkey has shown the bright face of Islam,” Khaled Meshaal, Hamas’s leader in exile, told the congress. “Erdogan, you are not only a leader in Turkey now, you are a leader in the Muslim world as well.”

But critics accuse Erdogan of an authoritarian approach, saying that he stifles dissent and uses the courts to silence his enemies. They also say he has failed to bring any hope of an end to a 28-year-old conflict in the mainly Kurdish southeast.The crisis in neighboring Syria has thrust Turkey to the forefront of international diplomacy, with Washington seeing it as the key player in supporting the Syrian opposition and planning for the era after President Bashar al-Assad.

Erdogan renewed his criticism of Russia, China and Iran, which have backed Assad in the 18-month uprising, saying history would “not forgive those who stand by oppressors”.Egypt’s Mursi echoed the sentiments, telling the congress that a quartet of regional powers consisting of Egypt, Iran, Turkey and Saudi Arabia would continue to push for a solution.

“We will not be calm, we will not settle down until this bloodshed stops and until the will of the Syrian people to choose their own leader is realized,” he said.In a speech heavy on rhetoric but light on detail, Erdogan looked back over the AK Party successes of the past decade but acknowledged that Turkey still faced major challenges.He said it badly needed a new constitution to replace one written after a military coup three decades ago, and invited opposition parties for consultations later this year.

“We will continue our struggle for a new constitution based on freedom, and which will allow diversity,” he said.Erdogan favors switching to a presidential form of government similar to France’s. It is an open secret that he covets the post himself, since under party rules he cannot seek another term as premier at the next parliamentary election in 2015.

He gave no hints on his political future beyond saying he would “do whatever job is given to me.”Opponents worry about Erdogan tightening his grip. Hundreds of politicians, academics and journalists are on trial accused of plotting against the government, while more than 300 army officers were handed long jail terms this month for an alleged bid to topple him almost a decade ago.

Critics also question his policy on the conflict with Kurdish militants in the mountainous southeast, bordering Iraq. Recent fighting has been some of the heaviest for years.He pledged a new chapter in relations with Turkey’s Kurds but called on them to denounce violence by the guerrillas of the Kurdistan Workers’ Party (PKK), considered a terrorist group by Ankara, the United States and the European Union.

“From today, we want to open a new page, and we want to make it a page of peace and brotherhood with our Kurdish brothers,” he said. “We expect our Kurdish brothers to take a step towards us, raise their voice against terror and say enough is enough.”Erdogan said in a television interview last week that the intelligence agencies might hold talks with the PKK when the time was right.

Masoud Barzani, president of Iraq’s autonomous Kurdistan region, told the congress: “As the people living in this region, we have to cooperate. No problem can be solved with violence … We will do our best to help Erdogan to end the bloodshed.”

Ankara has increasingly courted Iraq’s Kurds and imports oil from the region, further souring relations with the Iraqi government in Baghdad. But Turkey has also sent fighter jets to bombard PKK bases within Iraqi Kurdistan.The Kurdish conflict has claimed more than 40,000 lives since the militants took up arms in 1984, and as the death toll climbs so does the public pressure on Erdogan to bring an end to the bloodshed. – Alarabiya