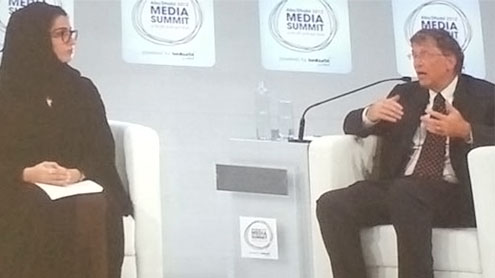 The summit, which will focus on “redefining the digital frontier,” will be attended by 400 leaders from across the global media industry, WAM, the official UAE news agency, said.In his keynote, Gates said despite the growth of the internet, accessing television was still cheaper than the web, the Dubai-based Gulf News reported him as saying. He added that the monthly fees for high-speed internet connection were still costlier than television channels.

When he was asked for a “free advice” by a man who introduced himself as an executive of a new broadcast channel in the region, he said that the new channel must invest 70 percent in broadcasting and 30 percent in new media but cautioned that this ratio would be the other way round in the next decade.

Ruled out running for office

The Associated Press reported Gates as saying during the summit on Tuesday that he doesn’t intend to join the parade of rich businessmen who have tried their hand at politics.Asked at the Abu Dhabi Media Summit about running for president, he said his current job with the Bill & Melinda Gates Foundation was “a very nice office” and that it didn’t require him to raise funds to “try to get elected,” nor does it “have term limits of eight years,” as do some elected American offices.

“I decided the philanthropic role is where my contribution would be more unique, and so that is what I will work on the rest of my life,” Gates said. “I actually think, maybe I’m wrong, that I can have as much impact in that role as I could in any political role. In any case, I would never run for political office.”Gates said he would be happy to offer the U.S. president his advice.

Gates devoted much of his speech to charitable causes and his foundation, especially its work toward eradicating polio from the three countries where it is still found — Afghanistan, Pakistan and Nigeria.“It’s the top priority of our foundation. We are convinced that ending polio is achievable and will bring lasting success,” Gates said. “It will lay the foundation for a better public health system for children in the poorest and most remote places.”

Gates said one of the biggest challenges in fighting polio was getting vaccines into high-risk areas. Health care workers have faced Taliban opposition in Pakistan and suspicions in other countries. He praised the United Arab Emirates for helping get doctors into remote areas of Pakistan, where they vaccinated 20,000 children against polio and measles.“It is also a mark of why this region can play a pivotal role in improving the lives of the poor,” Gates said. “The leaders and citizens here can reach out as partners to countries where they have special access and special kinship — areas where the rest of the world doesn’t have the standing to intervene in the way that leaders here can do.”

Gates called on Gulf citizens to embrace philanthropy and develop technology that can help the poor.“For too long, we in the West worked almost exclusively to develop and apply technology to meet the needs of the rich world, only for those who could pay. As you grow into a world hub for research, I hope you constantly search for ways to apply technology to help people who can’t pay,” he said.Gates also discussed new media, promoting the Microsoft Windows 8 and its soon-to-be released Surface tablet computer. He also advised caution to an entrepreneur in the audience planning to start an online Arab news channel station.

“I think it’s a little too early to put all your money on the interactive side unless you are just trying to go after high end audience,” Gates said.The Abu Dhabi Media Summit features a unique combination of high-profile public sessions, off-record forums and private conversations.Previous keynote speakers at the Summit have included industry leaders Rupert Murdoch, Eric Schmidt, James Cameron, James Murdoch, Yuri Milner and Hans Vestberg. – Alarabiya